A Washington Post poll conducted August 9, 2011 has some bad news for Obama.  Only 20% of Americans and only 33% of Liberals now say they will definitely vote for him. 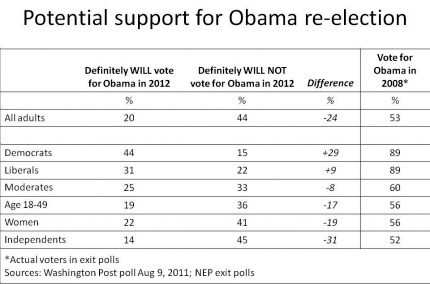 Source: http://www.washingtonpost.com/blogs/behind-the-numbers/post/obama-reelect-numbers-soften-poll-says/2011/07/12/gIQA1tBQ9I_blog.html?wprss=behind-the-numbers
Other results:
78% said they were Dissatisfied with the way the country’s political system was working.
71% said they thought the federal government was focused on the wrong things.
73% were NOT confident the government in Washington could solve economic problems.
69% said they were inclined to look around rather than re-elect their Congressman.
Read the complete results here: http://www.washingtonpost.com/wp-srv/politics/polls/postpoll_080911.html
Posted by The Attack Democrat at 10:05 AM