Income inequality and the decline of unions

Republicans celebrate the decline of unions.  Indeed, Reagan’s union busting in 1981 when he defeated the air traffic controllers’ strike by hiring permanent replacements is seen as a watershed year, celebrated by Republicans and acknowledged by most researchers as a turning point in which corporations were given the green light to engage in union busting.  New research by professors Bruce Western at Harvard and Jake Rosenfeld at the University of Washington, Seattle shows conclusively that the decline of unions in the private sector in the United States has contributed significantly to the growth of income inequality.
Income Inequality in the U.S. has grown significantly since 1980
Take a look at these two charts from the Economic Policy Institute.  The first shows average income growth from 1917 to 1980.  The second shows income growth in the U.S. from 1980 to 2008.  During the 1917 to 1980 period average incomes in the U.S. grew by $26,502.  The richest 10% of Americans enjoyed 31% of that growth.  However, 69% of that growth went to the bottom 90%.  After 1980, that changed.  The second chart covering the period of 1980 to 2008 tells a decidedly different story.  Average incomes grew but 98% of the growth went to the richest top 10% of Americans.  The bottom 90% hardly saw any growth at all. 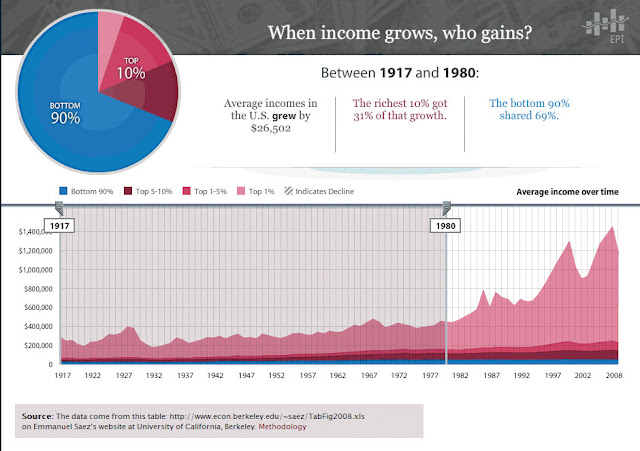 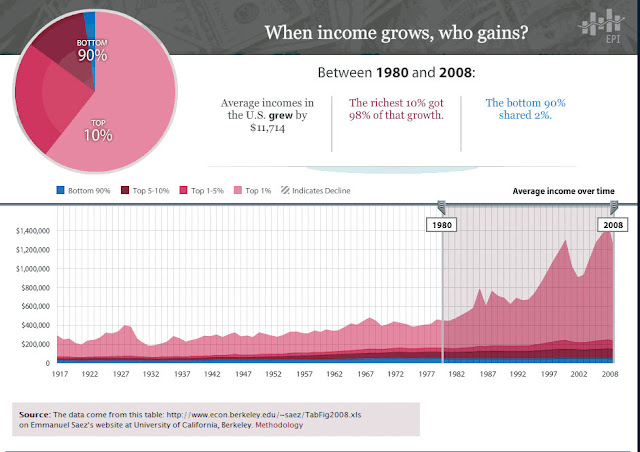 Source: http://www.stateofworkingamerica.org/pages/interactive#/?start=1917&end=2008
Union membership in the private sector has declined steadily since 1980
The growth on income inequality in America parallels the decline of unions.  As the chart below shows, private sector union membership peaked in the 1970s and began a slow and steady decline after Reagan’s union busting in 1981. 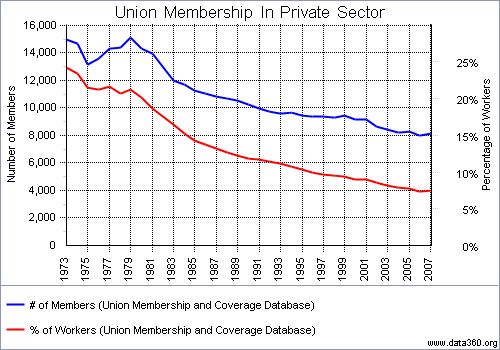