Senator Tom Coburn (R-OK), among others, has proposed raising Medicare’s eligibility age from 65 to 67 as a way to “fix Medicare.”  The Center on Budget and Policy Priorities (CBPP) ran the numbers and found that doing as Coburn proposes would indeed save the U.S. Government $5.7 billion in 2014 alone.  Sounds like a great idea, right?  Not so fast.  What Coburn doesn’t tell us but the CBPP does is that the $5.7 billion savings WOULD ACTUALLY COST the country $11.4 billion in other health care spending.  Let’s see, the Republicans want to save $5.7 billion by spending $11.4 billion.  Now, is that a good deal for the nation?  What do you think?  Here are the numbers and facts. 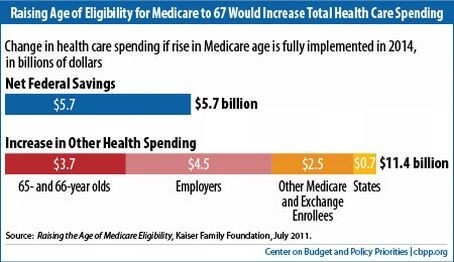 Here is the CBPP explanation of the $11.4 cost of the Coburn proposal.
Read the complete CBPP report here: http://www.cbpp.org/cms/index.cfm?fa=view&id=3564

Posted by The Attack Democrat at 10:12 AM