Jared Bernstein at the Christian Science Monitor took a look at jobs created and lost in Texas between 2007 and 2010.  Turns out Rick Perry’s so-called job creation depended a whole lot on creating government, not private sector jobs, and using stimulus money to make up for state revenue shortfalls.  Bernstein found that 47% of all government jobs added in the US between 2007 and 2010 were added in Texas.  In 2010, Texas used stimulus funds to make up 97% of its budget shortfall according to the National Conference of State Legislatures.”
The chart below tells the story: 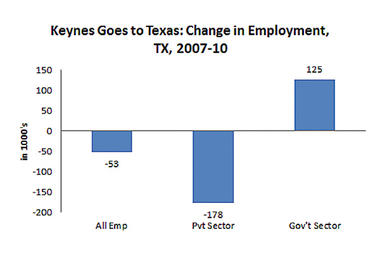