The following charts from the Center for Budget and Policy Priorities tell a disturbing story of lost jobs and lost opportunity.  Facing reduced revenues due to the anemic economy and the loss of federal funds due to Republican Party strategy to destroy the U.S. economy by demanding spending cuts, states and local governments have been forced to drastically cut spending, particularly spending on education.  Every economist will tell you that education is key to the country's economic future.  Every time we lay off a teacher or cut back on per pupil expenditures we destroy another piece of the only engine we have to drive growth in the future.

These charts tell the story.  Each year for the last three years state and local governments have cut jobs.  These cuts have offset any job gains in the private sector and are a major reason the unemployment rate stays above 9%.  A substantial percentage of the public job cuts and the majority of the cuts in 2010-2011 were in education.

When we cut spending on education, we destroy the future.  It’s that simple and that sad.  These cuts are a direct consequence of Republican demands for spending cuts in the name of deficit reduction.  In reality, as every political observer knows and many have said, the Republican Party has systematically pursued policies designed to keep unemployment high and the economy from recovering, operating on the theory that Democrats and Obama will be blamed and Republicans will benefit in the 2012 election.  The charts below show more of the damage the Republicans are doing to our future. 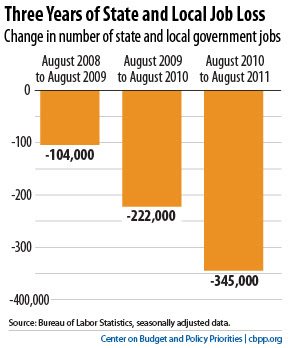 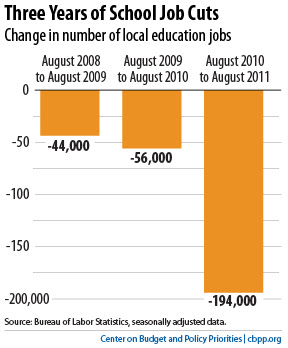 Posted by The Attack Democrat at 10:01 AM