Is the Buffett Rule right?

You have probably heard of the Buffet Rule.  Obama included in his deficit reduction plan a proposal that tax laws be changed so that millionaires like Warren Buffett would not be able to pay less in taxes than their secretaries.  He called it the Buffett Rule

Columnist David Brooks of the New York Times and other conservatives were particularly upset charging Obama with repeating a falsehood.  Brooks writes:

He repeated the old half-truth about millionaires not paying as much in taxes as their secretaries. (In reality, the top 10 percent of earners pay nearly 70 percent of all income taxes, according to the I.R.S. People in the richest 1 percent pay 31 percent of their income to the federal government while the average worker pays less than 14 percent, according to the Congressional Budget Office.)

So, who is right Obama or Brooks?  Actually, both.  It all depends upon how the super rich earn their money.  If they earn their money like most Americans through salaries, then they pay a higher effective tax rate that most Americans.  However, if they earn their money primarily through investments, which many do, then their effective tax rate will always be lower than that of Americans whose income comes entirely from earnings (salaries).  The reason is simple.  Income from investments is taxed at a much lower rate than income from earnings. The chart below shows the maximum total individual income and payroll tax rate for 2011 according to the Tax Policy Center.

The truth is that someone like Warren Buffett who gets most, maybe nearly all, of his income from investments very likely actually pays a lower tax rate than his secretary, so Obama is right.  On the other hand, if Warren Buffett got most or all of his income from a salary, like most Americans, then he would very likely pay a higher tax rate than his secretary who probably is salaried.

Those are the facts.  Read more at the link below. 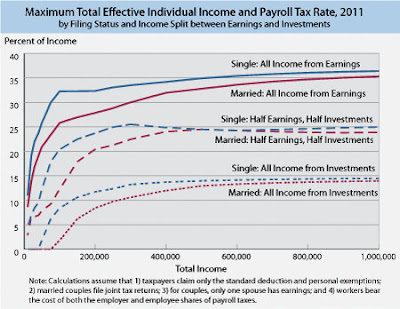 Now, no one, rich or poor, pays the maximum total individual income and payroll tax rate since the tax code is filled with deductions.  However, that’s another story.  Derek Thompson is a senior editor at The Atlantic explains:


To understand why, consider the 76 million people who don't legally owe individual income taxes in 2011 (please, please note: does not include payroll, excise, state and local taxes). The vast majority of this group was poor. They didn't owe individual income taxes because they didn't owe a lot of money to start, and various exemptions, like the earned income tax credit, wiped out the rest.

But among families making more than $100,000, there were also half a million tax units -- enough to replace the population of Tucson, Arizona -- that also paid no income tax. Even more surprising,7,000 millionaires also paid no individual income tax.

Let's focus on these 7,000 tax payers. I think they help to show why, even if the Buffett Rule is a sensible principle, it wouldn't be a commonsense law.

As Roberton Williams of the Tax Policy Center explained to me, there are three buckets of factors that can bring taxable income down from $1 million to zero. One is tax tricks. The IRS should crack down more. Two is relying heavily on investments. The administration can try to level taxes for earned income and investment income. Third is great misfortunes. When investments lose significant income, a house or business is destroyed (i.e. a casualty loss), or a family member gets sick and incurs high medical costs for the self-insured, all these things chop away at taxable income and eventually bring a millionaire's income taxes to zero.
Read more: http://www.theatlantic.com/business/archive/2011/09/buffett-rule-rorschach-7-000-millionaires-paid-no-income-taxes-in-2011/245469/

Posted by The Attack Democrat at 3:38 PM