A recent Fox News poll has Rick Perry losing significant support among Republicans as a result of his poor performance in debates and his “too liberal” stands on several key issues.  Perry is now the choice of 19% of Republicans, down from 29% in August.  Romney has regained the lead but hasn’t benefited from Perry’s fall.  Perry’s supporters appear to have moved to Herman Cain or Newt Gingrich.  Cain, now in third place, is the choice of 17% of Republicans in Fox’s most recent poll up from 6% a month ago.  Gingrich is now in fourth place with 11%, up from just 3% last month.  Seems the more Republicans get to know Perry the less they like him.  Is Perry about to go the way of Tim Pawlenty?  Maybe. Is Romney stuck permanently in the low 20s?  Maybe.  Can the Pizza guy pull it off?  Will Newt rise again?  Stay tuned.  Only thing that seems clear is that the Republican race is in chaos. 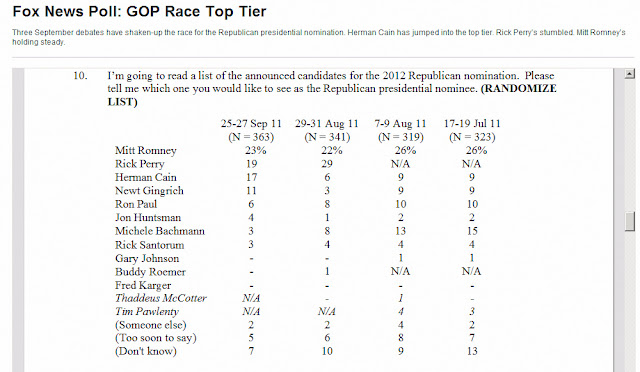 Posted by The Attack Democrat at 1:30 PM