How Romney could beat Obama

Stuart Rothenberg, editor of the Rothenberg Political Report, says if Romney is the nominee he has the electoral vote advantage in a contest with Obama.  According to Rothenberg, Romney has a good chance of getting 275 electoral votes, five more than needed to win, and could win a landslide victory with as many as 352 electoral votes.  Here is how. 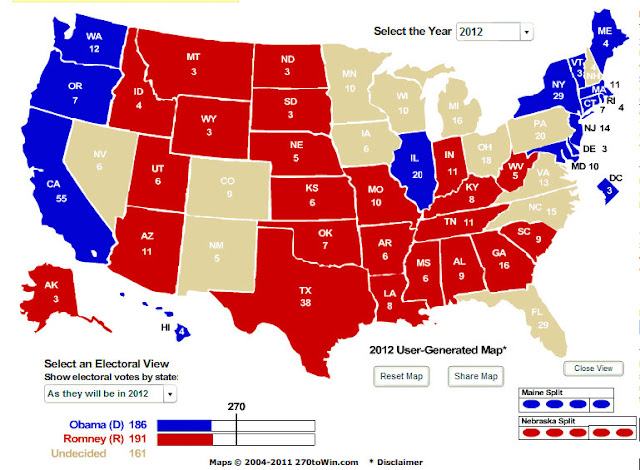 That leaves 13 toss up states—those in tan on the Map 1.  Rothenberg says four of these—Ohio, Florida, Virginia and North Carolina—are likely to go to Romney.

Given Obama’s job ratings, the public’s dissatisfaction with the country’s direction and the state of the economy, it’s difficult to imagine him winning the two big prizes, Ohio and Florida, again. Both states traditionally have preferred the GOP nominee when Democrats are on the defensive, as they will be next year. That’s 47 Electoral College votes for Romney.
Two Southern states, Virginia and North Carolina, could be competitive, but it’s certainly a stretch to call them tossups. Unlike 2008, Obama isn’t a blank-slate agent for change. Both states lean toward Romney, who would likely have enough appeal in the suburbs and among white independents to give him an edge. That is an additional 28 Electoral College votes for Romney. 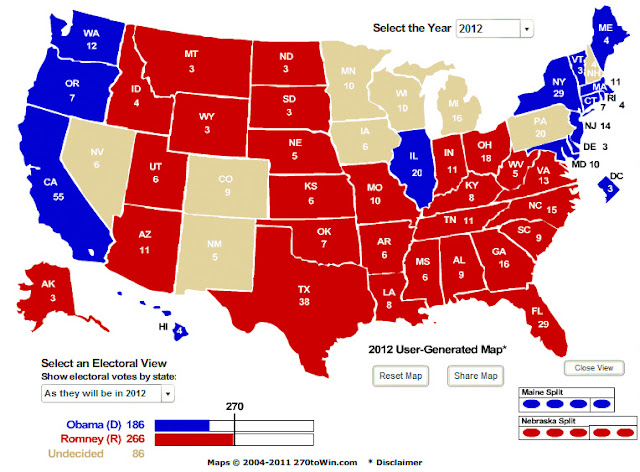 Obama won 53.7 percent of Colorado’s vote in 2008, but the Democratic nominee took only 47 percent in 2004 and 42.4 percent in 2000. This time, Obama will struggle with independent voters because he won’t benefit from the public’s dissatisfaction with the incumbent president. That makes him an underdog in the state.

Rothenberg ends with Romney getting 275 electoral votes.  Even if Obama carries all of the remaining competitive states, he can’t win.  See Map 3: 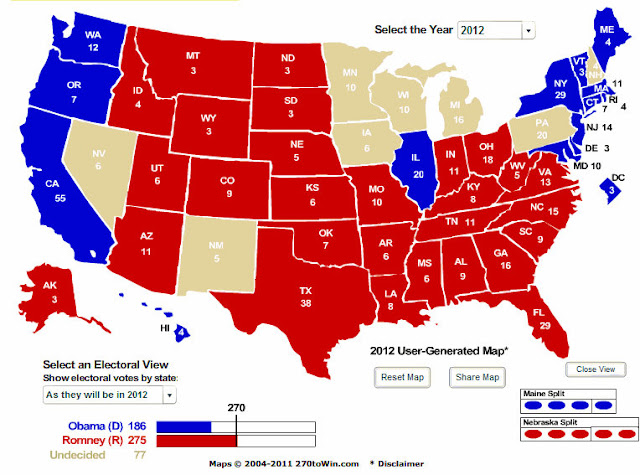 Given the current political climate, Rothenberg says Obama could lose all of the remaining states.

Unless the president can change the current political dynamic, he could well lose most or all of the remaining competitive states to Romney, who has enough appeal among swing voters to help him carry those states.

In short, Romney could win with a landslide victory of 352 electoral votes to just 186 for Obama.  See Map 4: 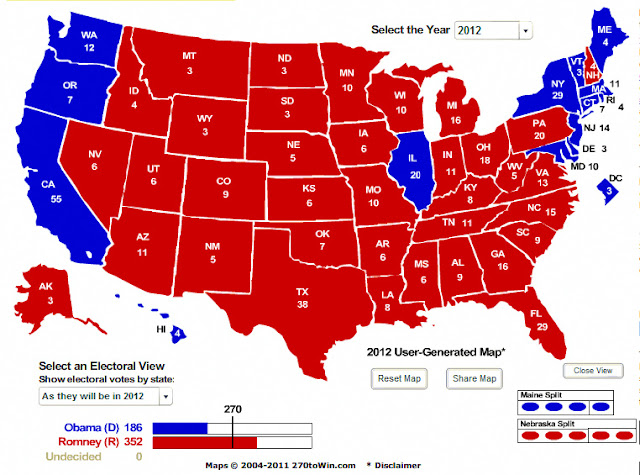 You can draw your own electoral map by going here:  http://www.270towin.com/