Gingrich UP, Cain DOWN in new polls

Two new polls have been just been released showing Gingrich gaining and Cain losing support as Republicans continue to look for anyone but Romney.

Public Policy Polling shows Gingrich now in the lead with Cain dropping to second.  Romney is in third place and Perry continues to lose support

CNN has Romney essentially tied with Romney for the lead with Gingrich in second and Cain dropping to third. 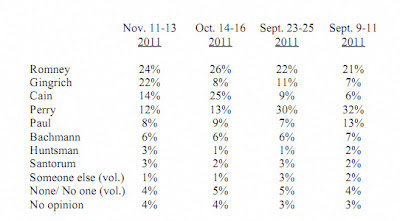 Both polls show Gingrich making significant gains since early September.  Both suggest that the sexual harassment charges against Cain may have hurt his chances and that he may have peaked.
Posted by The Attack Democrat at 2:11 PM