Sixty-four percent of Americans rate the honesty and ethics of members of Congress low or very low.  Congress gets basically the same rating as lobbyists but considerably worse that car salespeople and telemarketers.  See: http://www.gallup.com/poll/151460/Record-Rate-Honesty-Ethics-Members-Congress-Low.aspx

Both parties score poor on honesty and ethics but when asked which party was more honest and ethical in a recent Pew Research poll, only 28% of American voters picked the Republican Party while 45% picked  the Democrats.  See: http://www.people-press.org/2011/12/15/frustration-with-congress-could-hurt-republican-incumbents/

If you wonder why Americans don’t trust Republicans, you need to go no further than to examine the contents of the letter below that Republican Congressman Tom Price of Georgia recently sent to his constituents.  It is filled with misleading statements and outright lies. 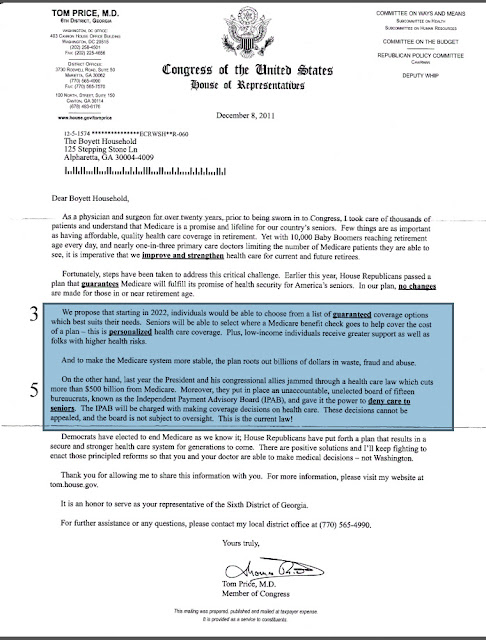 Paragraph Three is grossly misleading.  Price is talking about the Paul Ryan budget proposal.  He makes it sound so good.  Coverage is “guaranteed,” he says, and it is “personalized” and people with low incomes and in poor health will come out much better.  So, what’s the problem?  Price neglects to inform his constituents that Ryan’s proposal would not only destroy Medicare by turning it into a premium subsidy, defined contribution plan but it would also substantially increase the out-of-pocket costs of Medicare participants.   In a letter to Paul Ryan about his plan, the Congressional Budget Office said:

“Under the proposal, most beneficiaries who receive premium support payments would pay more for their health care than if they participated in traditional Medicare under either of CBO’s long-term scenarios. CBO estimated that, in 2030, a typical 65-year-old would pay 68 percent of the benchmark under the proposal, compared with 25 percent under the extended-baseline scenario and 30 percent under the alternative fiscal scenario.”

Contrary to what Price says in the first sentence of paragraph six, the Democrats are not the ones trying to “end Medicare as we know it.”  It is Price, Ryan and the Republican Party who are trying to kill Medicare.

Price makes additional false and/or misleading statements in paragraph five of his letter when he discusses Medicare “cuts” and the role and composition of the Independent Payment Advisory Board (IPAB) as defined in the health care law.

Price writes: “…last year the President and his congressional allies jammed through a health care law which cuts more than $500 billion from Medicare.  Moreover, they put in place an unaccountable, unelected board of fifteen bureaucrats, known as the Independent Payment Advisory Board (IPAB), and gave it the power to deny care to seniors.  The IPAB will be charged with making coverage decisions on health care.  These decisions cannot be appealed, and the board is not subject to oversight.   This is current law!”

That is NOT current law and never has been.  Here are three ways Price is misleading or just not telling the truth in this paragraph.


See the following for the truth about the $500 billion and the membership and power of the IPAB.

Bottom line:  Price’s letter is dishonest and unethical.  He deserves a vey low rating on honesty and ethics.  He doesn’t deserve to be re-elected.  Neither, do his fellow Republicans.

Posted by The Attack Democrat at 3:41 PM