By now you have probably heard a bunch of garbage from the right and religious groups AND Mitt about how the Obama administration is attacking religion, the Catholic church, etc. etc. etc. because Health and Human Services says if you take federal dollars, unless you are in the religion business, you must include access to contraception as part of your health insurance offering.  It’s all very sensible and ISN’t an attack on anyone’s religion, particularly Catholics.

Facts are most Catholic women use contraception and most Catholics, like most Americans regardless of religion or non-religion SUPPORT requiring employers to provide their employees with the OPTION of choosing health care plans that cover contraception or birth control at NO COST.  Here are the results of a February 2012 survey.  Most Americans SUPPORT such coverage.  Catholics actually SUPPORT such coverage in GREATER NUMBERS than most Americans and those unaffiliated with any religion.  The only group opposed are WHITE EVANGELICALS, the same nuts that want to ban teaching evolution, keep gays from marrying, require all kids to recite the Lords Prayer in public schools even if their parents aren’t Christian, etc. etc.

This isn’t about an attack on religion.  It’s an orchestrated ATTACK on Obama.  It’s politics, nothing else.
Period.
Read more here:  http://publicreligion.org/research/2012/02/january-tracking-poll-2012/ 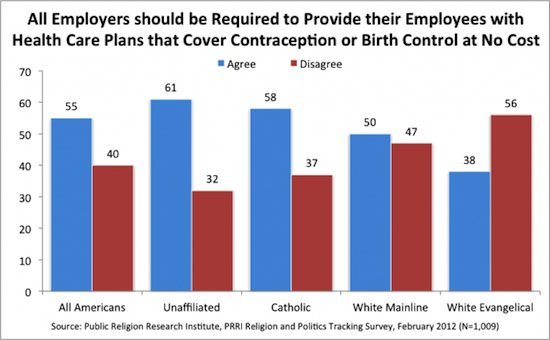 Posted by The Attack Democrat at 5:40 PM