For the second day in a row, the Virginia House of Delegates has postponed a vote on the controversial legislation that would require women seeking an abortion to have an invasive, trans-vaginal ultrasound. After hundreds of Virginians lined the streets around the capitol in silent protest yesterday, the House postponed the vote until today.

But the controversy over the legislation, and perhaps the fear that they might just be overreaching on this one, led to another postponement.

I want you to fully understand what the Republicans are demanding.  They want to pass a law that if a woman and her doctor decide she needs an abortion for whatever reason she will be forced against her will to undergo an invasive procedure.  What it exactly is that procedure.  Here is a graphic picture. 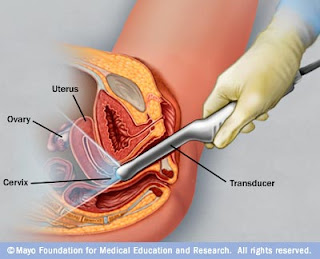 Posted by The Attack Democrat at 5:46 PM