The Guttmacher Institute (GI) that supports sexual and reproductive health has just released a report on the rights of women to have access to abortion.  GI reports that there has been a seismic shift since 2000 in the number of states hostile to abortion as a result of Republicans gaining control of state legislatures.  “Hostile” states were defined as states with four or more of the following restrictions.  “Middle Ground” states had enacted two or three.  “Supportive” states had enacted one or none.

The number of states hostile to abortion rights has grown substantially since 2000.

Much of this increase in hostility toward abortion has come about just in the last year as conservative Republican legislatures have launched an all out attack on womens’ rights to health care. 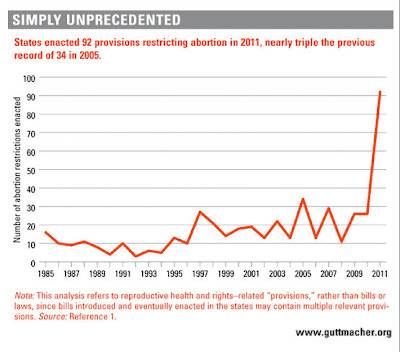 As a result of the attacks on rights of women to reproductive health care by Republicans, a majority of women in the U.S. now live in states hostile to their reproductive rights. 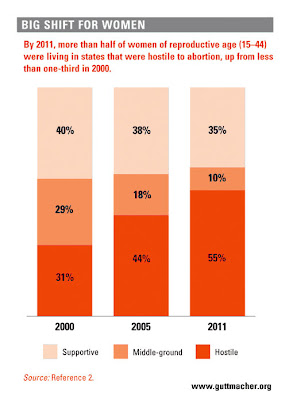