Polling: the wording of the questions matters

I’ve posted about this before but here is a recent and vivid example.  Results of a public opinion poll cans be shaped greatly by the way questions in the poll are worded.  Here is a good and recent example.

To its credit, Pew reported how results from the poll changed as a result of changes in the wording.

The question about the individual mandate read as follows:

As you know, by 2014 nearly all Americans will be required to have health insurance. [People who do not buy insurance will pay a penalty.] while [People who cannot afford it will receive financial help from the government.]  Do you approve or disapprove of this policy? 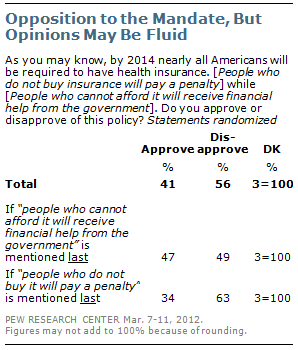 Lesson: The wording of interview questions has a great impact on the result.  In other words, you can’t really gauge the accuracy of the results if you aren’t told the exact wording of the questions AND whether the pollsters took steps to minimize any kind of bias in the wording.

Whenever polls results are impacted to such an extent by the wording of the questions, it is a good indication that Americans have not yet formed firm opinions about the issue being polled and that consequently later polls on the subject could yield different results, perhaps quite different results.

Posted by The Attack Democrat at 2:06 PM