As you probably know the unemployment rate dropped to 8.1% last month due to a drop in the labor force participation rate to 63.6%, the lowest point since December 1981  So, what age group has left the workforce?  Could it be that baby boomers are just retiring early?  Apparently not.

Matthias Shapiro at Wall Street Pit took a look at the Bureau of Labor Statistics labor participation rates for different age groups since January 2008.  He finds that the largest drop in labor force participation since January 2008 is among 16 to 19 year-olds, followed by 20-24 year-olds. Young people are either staying in school or giving up on finding a job if they have little education. Biggest gains have been among 60 year-old plus, particularly 65-69 year-olds, who are continuing a long-term trend of delaying retirement or seeking to continue to work full or part-time into their seventies or beyond. 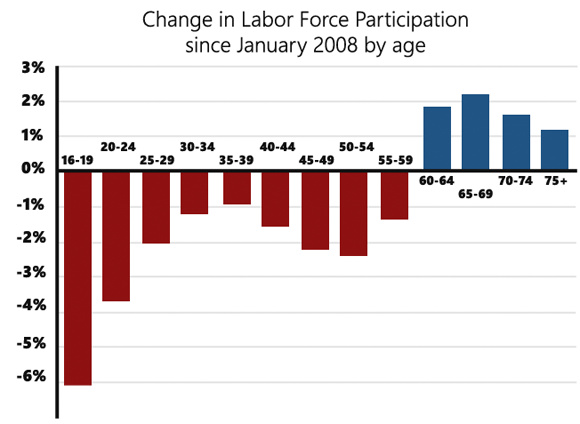 Posted by The Attack Democrat at 4:11 PM