What’s happening in the Pres Race?

Polls keep coming out showing a significant change in Romney’s standing both nationally and in the swing states.  There seems to be no doubt that Romney’s performance in the debate or, at least, the media celebration of his performance and criticism of Obama’s has made a difference.  I think the debate bounce for Romney will be offset by the September jobs numbers to some degree and that the final bounce will be 3% or less, maybe only 1% to 2%.  We will see.

Votamatic.org has some good charts showing what has happened since the debate, some of which was already happening.  Take a look at the charts below (or go here: http://votamatic.org/state-trend-detail-d-tier/)

It is clear from the charts that Obama had a very good September because of his post-convention bounce.  That bounce was already fading somewhat and Romney’s debate performance or, if you will, Obama’s poor performance resulted in a dramatic decline for Obama.  We now have a race that looks more like where it was in early September.

Finally, look at August in the charts.  Obama was in decline.  If we have a repeat of August in October then all bets are off.  Obama will be in BIG, BIG trouble and we could have Willard in the White House.  Don’t panic yet, but WORRY—a lot. 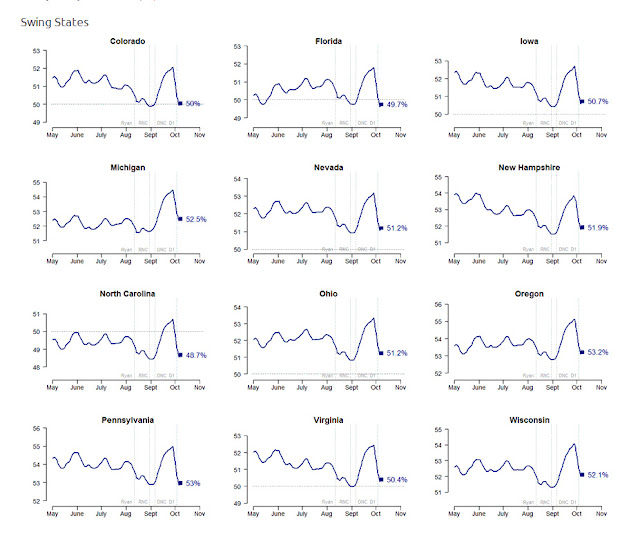 Posted by The Attack Democrat at 5:35 PM