Truth about the debt and debt ceiling

Here are two useful charts to share with your Republican/Tea Party/”Hell NO, we won’t raise the Debt Ceiling” friends.  The first shows who we owe.  The second shows what bills we could NOT pay on March 1, 2013 if we had to rely upon month receipts and cash on hand.

Chart One: The Truth About the Debt

Republican/Tea Party/”Hell NO” folks say that all this debt means we are mortgaging our country to the Chinese and other foreigners.  The problem with this line of argument is that it is bull.  Take a look at this chart.  Two thirds of the debt we owe, we owe to ourselves—U.S. citizens, Social Security Trust Fund, U.S. Civil Service Retirement Fund, U.S. Military Retirement fund, and so on.  We owe just 8% of our debt to the Chinese and 7% to the Japanese.  So tell the Repubs to shut up already about mortgaging our future to foreigners.  The only people we are mortgaging our future to are ourselves. 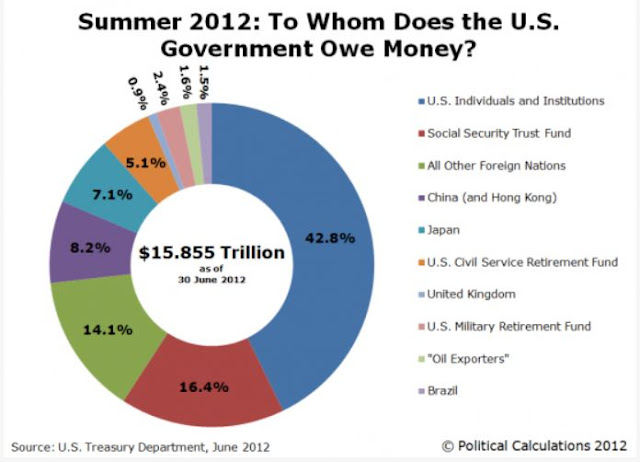 If you can't see the chart, go here: http://www.hillbillyreport.org/diary/4375/some-debt-truth

Chart Two: The Truth About the Debt Ceiling

So, what would it really mean if we didn’t raise the debt ceiling and the U.S. Government had to rely totally on incoming revenues each month to pay its bills?  Take a look at this chart.  March 1, 2013 the U.S. Government would have $20 Billion in revenues but $83 Billion of bills to pay.  The $20 Billion would not be enough to pay Social Security benefits due and barely enough to pay Medicare/Medicaid bills.  Someone would have to make some choices.  Ask your Repub/Tea Party/Hell No friends what they would do.  Ask them if they would just cut off Social Security retirees.  Sorry grandma and grandpa, no Social Security deposits to your bank account, not until we get some more money.  Or, maybe they would not pay Defense Vendors or not send out IRS refunds or not pay soldiers on active duty.  Maybe they would tell Senators and Congressmen and their staffs that their paychecks would be a little late, if they got them at all. 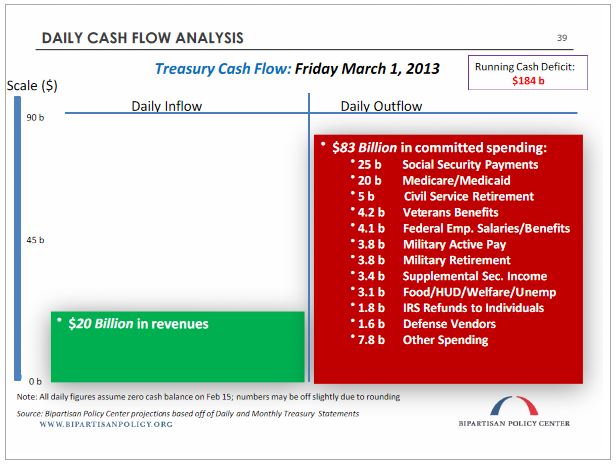 If you can't see the chart, go here: http://bipartisanpolicy.org/library/staff-paper/debt-limit  and scroll down to page 40 of the report.


Posted by The Attack Democrat at 4:53 PM