Once again Republicans are wrong

Once again Republicans have been shown to be wrong, this time about the national debt, economy, and the necessity for austerity and aggressive efforts to reduce the national debt.
Republicans and others, like many leaders in Europe, have preached that austerity is the only way to prevent a country like the U.S., Greece, Spain, Italy and so on from slipping into permanent economic decline.  They relied largely on one 2010 study by economists Carmen Reinhart and Kenneth Rogoff to justify their policy recommendations.  Reinhart and Rogoff claimed their research showed that high debit led to slow growth.  Deficit hawks have repeatedly cited the Reinhart/Rogoff study as justification for countries adopting austerity budgets to hold down their debt loads even at the expense of sky high unemployment.  Now, a new study shows that the Reinhart/Rogoff study was deeply flawed and, as many economists suspected, the austerity obsession is just that—an unsupported and wrong headed obsession.

Here is a summary of the findings from the new study: 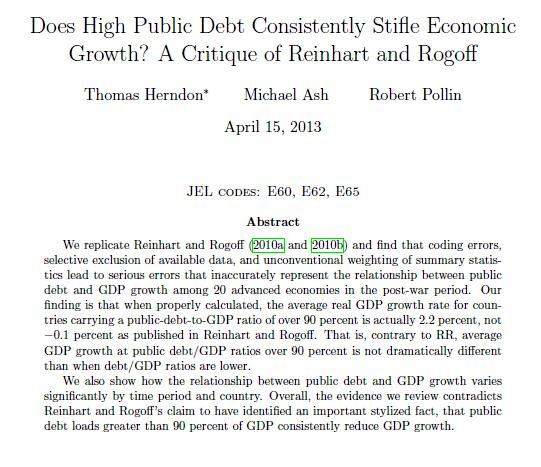 
Posted by The Attack Democrat at 5:41 PM