Have we finally turned the corner on same sex marriage? Perhaps

As of August of this year, 12 states and the District of Columbia will have legalized same-sex marriage (MA, CT, IA, VT, NH, DC, NY, WA, ME, MD, RI, DE, and MN).  Read more about state legalization here: https://en.wikipedia.org/wiki/Same-sex_marriage_in_the_United_States

The Pew poll suggests that more Americans accept same-sex marriage because more Americans now know someone who is openly gay or lesbian including a family member or close friend.
Gay and lesbian Americans who came out over the last several decades did this country a great service.  They allowed Non-gay/lesbian Americans to get to know them.  And guess what?  Straight Americans discovered that gays and lesbians weren't strange or dangerous or deviants or even that unusual.  They were just normal Americans who wanted nothing more than to be treated like everyone else.


Here is a chart from Pew that tells the story.  You can also see it and read more about the poll here. 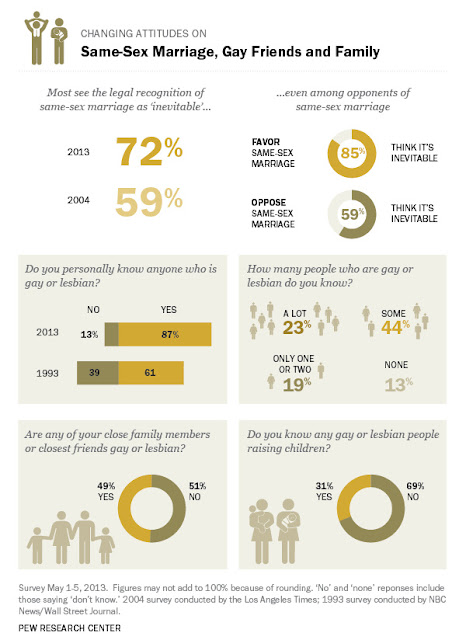 Posted by The Attack Democrat at 4:41 PM