Republicans can impeach Obama but they cannot remove him from office. Here's why

Can Republicans Impeach Obama?  YES.
Currently, Republicans control the House 254 members to 199 Democrats.  According to Article I, Section II of the U.S. Constitution, the House of Representatives has "the sole power of impeachment."   Republicans only need 227 votes to impeach Obama.  They certainly would have enough votes to do so if Speaker John Boehner agreed to bring impeachment charges to the floor of the House for a vote.

Can Republicans remove Obama from office.  NO.
According to Article I, Section III of the U.S. Constitution the U.S. Senate has "the sole power to try all impeachments" and "no person shall be convicted (and removed from office) without the concurrence of two thirds of the members (of the Senate) present."  In other words, if Obama were impeached, the Senate would conduct a trial in which 2/3rds of the Senate (67 Senators) would have to vote FOR conviction and removal from office.

Even if Republicans win control of the Senate in November, it would be impossible for them to remove Obama from office. Here is why.

The U.S. Senate currently consists of 53 Democrats, 2 Independents who vote with the Democrats, and 45 Republicans.  Thirty-six seats in the Senate are up for election in 2014.

Forty Democratic seats are either not up for election or are generally considered out of reach for Republicans. Additionally, 6 races are seen as Likely or Leaning Democrat based upon current polls.  In other words, it is almost certain  that the Democrats will retain a minimum of 40 seats and very likely 46, even if Republicans take control of the Senate, which is possible but by no means certain.

Democrats would need only 34 votes to block any effort by Republicans to remove Obama from office.  They will almost certainly have the votes they need even if the November is a disaster for them.

BOTTOM LINE:  Obama will serve out his full second term, regardless of what Republicans do even if they take control of the Senate in November.

Here is the data from Real Clear Politics: http://www.realclearpolitics.com/epolls/2014/senate/2014_elections_senate_map.html 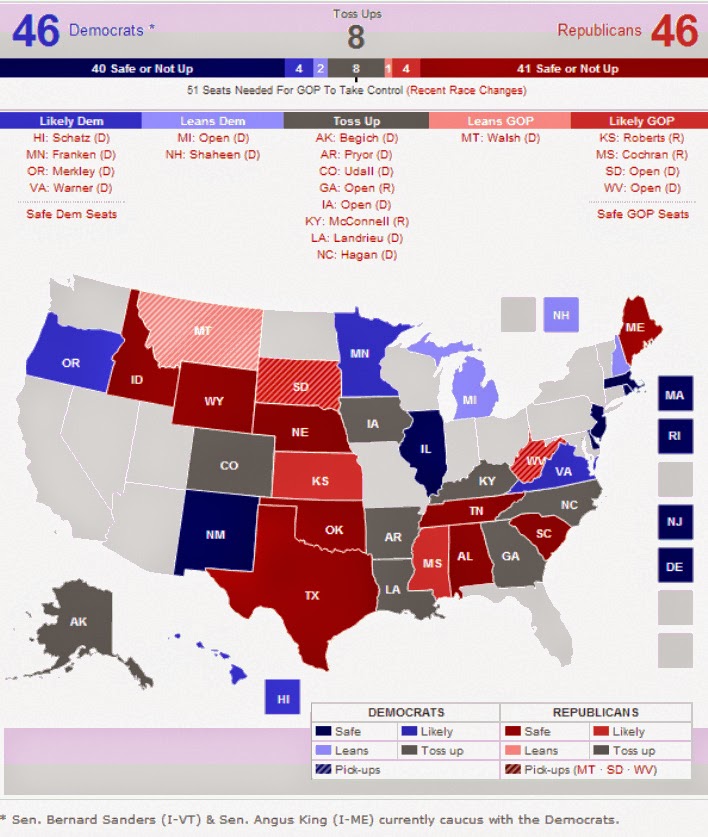 Posted by The Attack Democrat at 4:38 PM