Unemployment—Obama vs the Republicans—Who Was Right?

You don’t hear the Republicans talking very much about the Obama record on unemployment anymore.  There is a very good reason for that.  Obama and the Democrats have done a pretty good job in bringing unemployment down.  In fact, we may be on track to a full or near-full employment economy (that would be around 4% or so) in the next few years unless, of course, Republicans gain control of the White House and implement their disastrous economic policies.

Take a look at Chart 1 prepared by the Council of Economic Advisors.  Unemployment in the U.S. in 2010 and then began to decline at a steady rate largely due to the stimulus package passed by a Democratic Congress and signed by Obama, a stimulus practically every Republican opposed.  Not only has unemployment come down, but it has come down at a faster rate than forecast.  Had the stimulus been larger or Congress had passed a second stimulus in 2010, the unemployment rate would have come down faster.  Since 2010, we had positive job growth just about every month with the average number of jobs per month being created INCREASING every year.  See Chart 2. 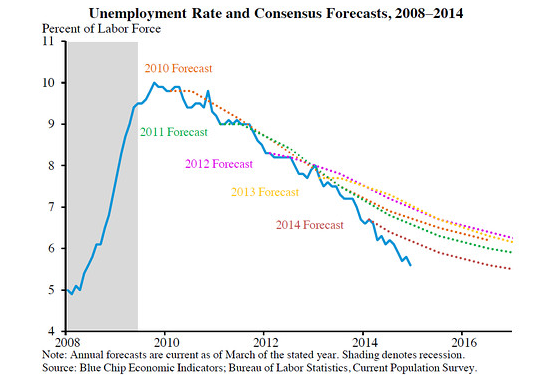 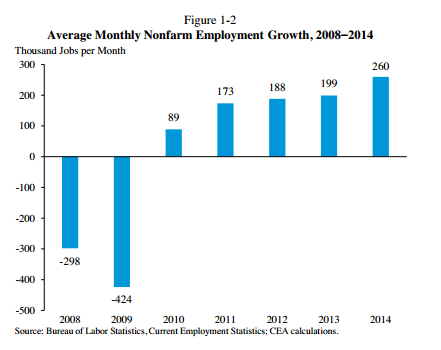 Source: Economic Report of the President 2015 by Council of Economic Advisors
http://www.whitehouse.gov/sites/default/files/docs/cea_2015_erp.pdf

What Would Have Happened If We Followed Republican Economic Policy?

It is obvious from the Charts 1 and 2, that Obama and the Democrats handled the economic crisis of 2008 pretty well, particularly when it came to getting Americans back to work.  But, how would our country have fared if we had followed the approach the Republicans advocated.  Well, we will really never know (fortunately) however, we can compare the Obama/Democratic record to the record of the European Union.  Europe listened to the Republicans.  In fact, Republicans praised the Europeans at the time for taking the right approach—you don’t hear that from Republicans anymore.

Take a look at Chart 3, particularly the segment from 2008 on.  It compares the unemployment rate in Europe to that of the U.S.  The U.S. Europe experienced just about the same spike in unemployment due to the 2008 recession.  Both the U.S. Europe seemed to be on track to a slow but steady recover after 2009.  Then, by 2011 or so, there is a drastic change.  Unemployment keeps coming down in the U.S., but starts back up in Europe.  Why?  The Europeans practiced Austerity—just what the Republicans advocated.  The U.S. a stimulus.  The Europeans focused on deficits and cut spending.  Today the unemployment rate in Europe is twice what it is in the U.S.

(See more on the impact of a Republican Austerity approach to an economic crisis here: http://econ.economicshelp.org/2011/12/how-does-austerity-affect-economy.html 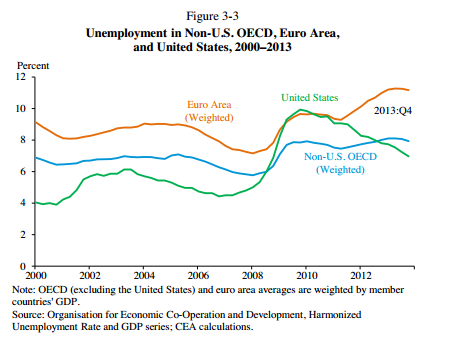 Bottom Line:  Obama and the Democrats were right when it came to how to deal with the spike in unemployment during our most recent recession.  The Republicans offered a prescription for disaster, but they have not learned from their wrong-headed thinking.  They still offer the same old economic talking points-“cut spending, cut taxes for the rich, focus on deficit reduction.”  We’re on track to full employment thanks to Obama and the Democrats.  The only thing standing in our way is the prospect of Republicans gaining power.. Think about it.
Posted by The Attack Democrat at 3:02 PM