Our Government is Broken and It Probably Can’t Be Fixed

Our form of government is very likely irretrievably broken.  The most we may be able to expect from the federal government is constant crisis, indecision, and the inability of Congress, the President, and the federal courts to govern.  That’s the conclusion of  Matthew Yglesias in a recent article in Vox.  (See: http://www.vox.com/2015/3/2/8120063/american-democracy-doomed/)  Yglesias writes:

“To understand the looming crisis in American politics, it's useful to think about Germany, Japan, Italy, and Austria. These are countries that were defeated by American military forces during the Second World War and given constitutions written by local leaders operating in close collaboration with . It's striking that even though the US Constitution is treated as a sacred text in America's political culture, we did not push any of these countries to adopt our basic framework of government.”

Just about every other country has created a parliamentarian form of government rather that the presidential form found in the U.S.  Why? It’s very simple writes Yglesias:

“In a parliamentary system, deadlocks get resolved. A prime minister who lacks the backing of a parliamentary majority is replaced by a new one who has it. If no such majority can be found, a new election is held and the new parliament picks a leader. It can get a little messy for a period of weeks, but there's simply no possibility of a -long spell in which the legislative and executive branches glare at each other unproductively.”

But within a presidential system, gridlock leads to a constitutional with no resolution.

Yglesia notes that in a climate of sharp ideological differences, both sides begin playing "constitutional hardball.”

Conservative Republicans faced with a liberal, Democratic Senate and a Democratic President begin using the filibuster to not just block the President and majority party on the big issues but on just about every piece of legislation and every Presidential appointment.  Not getting their way, they threaten to even shut down the government completely.  As Yglesias notes, the Republicans weren’t doing anything illegal or unconstitutional, but what they were doing was “in its intent and its scope, unprecedented.”  The same could be said for Obama’s counter moves.

As relations with Congress have worsened, the Obama administration has set about expanding executive authority over domestic policy to match Bush-era in the national security domain. This came to the fore most publicly with Obama's decision to protect millions of unauthorized migrants from deportation without congressional agreement.

Again, in spite of what you hear from Republicans and Fox News, there was nothing illegal or unconstitutional about what Obama was doing, what he has said he felt he had to do to get something done in Washington.  However, it is unprecedented.

Yglesia sees no hope that things will get better.  Congressional districts are now, for the most part, gerrymandered by Republican state legislatures to ensure that the House of Representatives will be filled with Republicans with extremely Conservative views facing a minority Democratic caucus with less extreme but decidedly liberal views.  Today the divide in the House is so great along ideological lines that, as someone said, the most liberal House Republican is far more conservative than the most conservative House Democrat.  There is almost no overlap between the two parties, at least in the House and this ideological divide continues to increase in the Senate as it does among the American public in general.  Consider these charts prepared by Pew Research. 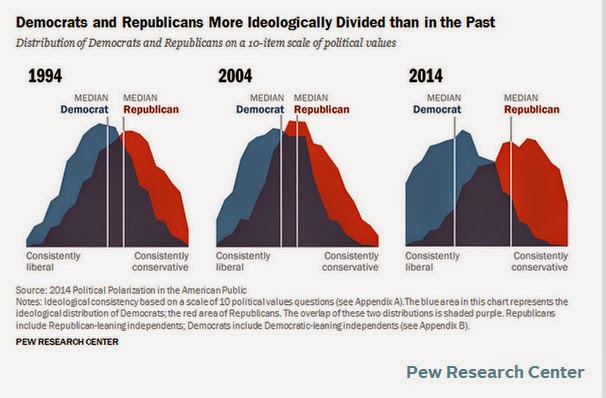 Could A Dictatorship Be in Our Future?

In a separate article at Vox, Dylan Matthews predicts that continuing and worsening gridlock in Congress will lead to a tremendous expansion of presidential power regardless of which party controls the White House or whether the President is a liberal or conservative.  Matthews notes:

“Any president worth his salt is going to want to make major revisions to statutes and to alter the fiscal status quo. They're going to want to raise taxes on the rich and increase transfer programs, or slash taxes across the board while restructuring entitlement programs, or rewrite No Child Left Behind and make Medicare more cost-effective, and so on. Their legacy as more than placeholders depends on leaving some kind of legislative mark.”

Under a best case scenario, writes Matthews, we could end up with an ” an elective retain peaceful transitions of power.”  In the worst case, we end up with a President with greatly expanded powers who decides to use (those powers) to punish political enemies, interfere with elections, suppress dissent, and so forth.”

Matthews doesn’t think that either scenario is very likely for a long time, perhaps ever.  However, it could happen.  That’s disturbing.  Matthews thinks it is time for us to begin thinking about a new and more workable and lasting parliamentarian form of government.  Why not?  We did it before in 1788.
(See: http://www.vox.com/2015/3/3/8120965/american-government-problems/)


Posted by The Attack Democrat at 4:35 PM