According to the Gun Violence Archive, over 11,000 Americans have been killed or seriously injured by Gun violence so far this year, including 309 children under the age of 11 and over 1,000 teenagers. Over 130 of the gun incidents have involved mass shootings like the recent incident in Charleston.  That’s just so far this year.  And, the year isn’t half over.

If foreign terrorists were killing Americans at this rate, there would be an outcry for Congress and the President to do something to stop the gun violence or at least slow it down.  But, foreigners aren’t killing and injuring Americans.  We are doing it to ourselves and we don’t seem to even care.


The sad fact is that most Americans are very happy to allow gun violence to continue.  Support for stricter gun control is at an all time low according to data compiled by FiveThirtyEignt.com.  See the chart below

If that fact doesn't bother you, you are part of the problem. 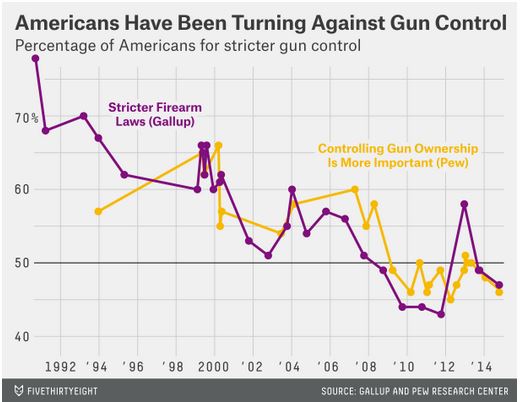 Source: http://www.gunviolencearchive.org
http://fivethirtyeight.com/datalab/the-massacre-in-charleston-is-unlikely-to-lead-to-gun-control-legislation/
Posted by The Attack Democrat at 4:11 PM