Good News for Democrats--Young, Black and Hispanic Turnout Up Sharply in Battleground States

Analysis of early voting in key battleground states indicate that early voting among key Democratic Party leaning groups is way up compared to 2014.   In Georgia, voting by 18 20 29 year-olds in up an amazing 429% and 571% among Hispanics.  African-American voting is up 165%.

In both states, the increase in turnout vs 2014 is higher among Democrats and Independents than among Republicans;

Check out the charts below: 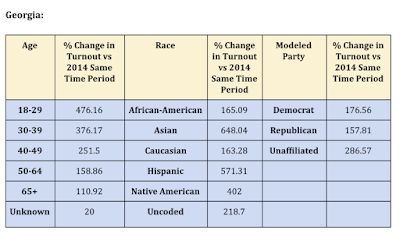 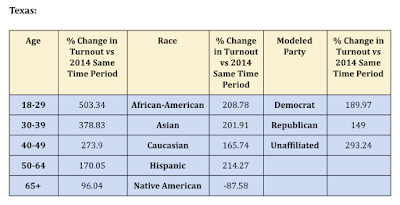 For information about turnout in other battleground states go to:

Posted by The Attack Democrat at 2:19 PM