This Labor Day working Americans will be happy to hear, I’m sure that America’s corporations have doing very well.  As the chart below shows, corporate profits have turned around nicely and are now significantly above their peak in 2006.  American corporations have largely put the recession behind them and are on their road to a bright future.  See the Red line.
What’s that Blue line on the chart?  Oh, we shouldn’t worry about that on Labor Day.  It’s just worker compensation continuing the steady decline that began in 2001 after GW’s election.
Now some progressives might see something wrong with the Red and Blue lines.  They might feel that when corporations do well, workers should share in the prosperity.  Progressive believe we need one economy, not two.  Republicans disagree, of course.  They think the chart below looks just about right.  They think we should be helping corporations so that Blue line could shoot straight up.
What do you think?  Are you happy with the way those Red and Blue lines look this Labor Day? 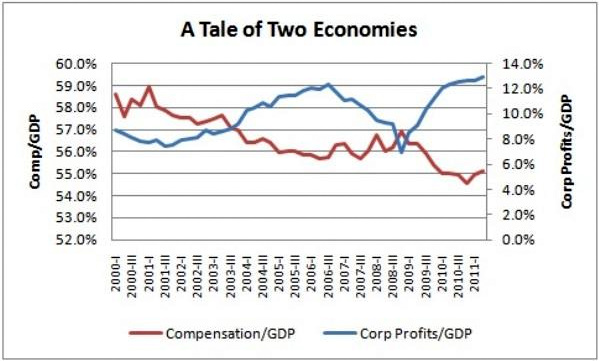 http://motherjones.com/mojo/2011/09/chart-happy-labor-day-if-youre-ceo
Posted by The Attack Democrat at 3:32 PM