New evidence—Stimulus was too small

The Obama stimulus sought to restore the economy to health and reduce unemployment by offsetting demand lost during the recession.  Republicans argue that the stimulus didn’t work.  They are wrong.  The stimulus worked but it wasn’t large enough to get the job done.  Obama and the Democrats prescribed the right medicine.  They just got the dosage wrong.  Of course that wasn’t their fault.  Republicans didn’t want any stimulus at all.  When they realized that wasn’t going to happen, they fought to keep the stimulus as small as possible.
We have new evidence that Obama and the Democrats should have insisted upon a much larger stimulus package.  In fact, we have evidence that the stimulus needed to be three, four or even five times larger than it was to really offset the loss of demand during the great recession.
The evidence is contained in the following graph prepared by Dean Baker and presented in his new FREE online book The End of Loser Liberalism:
Baker calculates that the recession resulted in an aggregate annual loss of demand of around $1.5 trillion per year.  In other words, $1.5 trillion per year in consumer and other spending that made the economic wheels turn, suddenly evaporated.  The stimulus in total added only about $300 billion per year into the economy in 2009 and 2010.  That helped to offset some lost demand but it wasn’t nearly enough.  It is clear, the stimulus needed to be much, much greater.
Imagine if your doctor told you to take 4 or 5 pills per day to cure your infection and you let your Conservative/Republican buddy convince you that 1 pill a day is more than enough.  You shouldn't blame the doctor if you aren’t cured.  Blame your Republican friend.
Take a look at Baker’s chart: 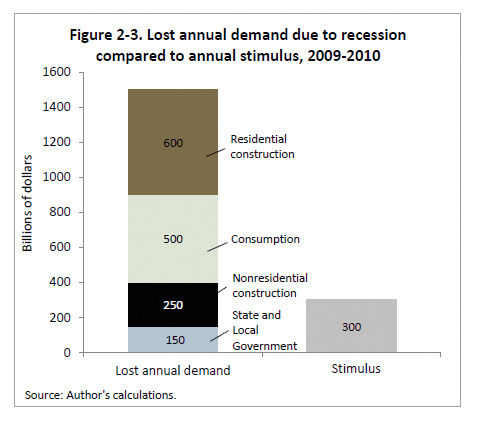 Download a copy of Baker’s new book here:  http://www.cepr.net/index.php/publications/books/the-end-of-loser-liberalism
Posted by The Attack Democrat at 5:01 PM