As you know, presidents aren’t elected by winning the popular vote but  by winning the electoral college vote which is awarded state by state usually according to a winner takes all formula.  Each state gets a number of electoral votes equal to its number of Senators and Representatives.  Currently there are 538 electoral votes.  A candidate for president must receive the majority of those votes—or 270 votes—to win.

Barring a Carter-like collapse, President Obama is assured of 175 electoral votes from 12 deep-blue states and the District of Columbia: California (55 electoral votes), Connecticut (7), Delaware (3), Hawaii (4), Illinois (20), Maryland (10), Massachusetts (11), New Jersey (14), New York (29), Rhode Island (4), Vermont (3), Washington (12) and Washington, D.C. (3). Three more states are not quite as certain, but still likely Democratic: Maine (4), Minnesota (10) and Oregon (7). Even though Minnesota is competitive enough to vote Republican under the right set of conditions, it is the state with the longest Democratic presidential streak, dating to 1976.

Four other states usually end up Democratic for president, but the margins can vary considerably from year to year: Michigan (16), New Mexico (5), Pennsylvania (20 and Wisconsin (10). A low Hispanic vote in 2012 could flip New Mexico; Al Gore carried it by only 366 votes in 2000 and a concerted effort by George W. Bush flipped it in 2004. Deep-seated economic problems might cause Michigan to reconsider its party ties. Narrowly Democratic in 2000 and 2004, Wisconsin is a cauldron of unpredictable countertrends. Pennsylvania has frustrated all GOP attempts to win it over since 1988, yet recent polls have shown new weakness for Obama here. These 51 electoral votes will be GOP targets if conditions in the fall of 2012 approximate today’s.

The Obama forces have bravely boasted that they can turn Arizona (11), Georgia (16) and Texas (38), mainly because of growing Latino vote power. After Democrats’ surprise victories in states such as Florida and Virginia in 2008, one shouldn’t reject these assertions out of hand. Still, with the economy in the tank, electoral claims on these big three will likely go the way of John McCain’s early declaration in ‘08 that California was within his grasp. Count another 65 Red votes here.

Four years ago even many optimistic Democrats didn’t really believe they would pick up Indiana (11), North Carolina (15) or an Omaha electoral vote in Nebraska, which like Maine awards one vote per congressional district. All three went for Obama by small margins. Indiana is very likely to desert Obama next time, as is the Cornhusker district, barring another big Obama victory. The Democrats chose Charlotte for their national convention, and they will make a big play to keep the Tar Heel state. As of now, that looks tough. Thus, Republicans lead for 26 more electors. Missouri was the sole squeaker that went for McCain; few believe it will be tight next year, and the GOP has those 10 votes, too.

Sabato says there will be seven swing states in the 2012 election:   Colorado (9), Florida (29), Iowa (6), Nevada (6), New Hampshire (4), Ohio (18) and Virginia (13).   So, these are the states to watch.  Keep in mind that according to Sabato, Obama can count on about 247 electoral votes.  Republicans can count on 206.  Obama needs 23 electoral votes to get to the magical 270 winning number.  Republicans need 64.  That means Obama has many more ways to win than the Republican.  For example, he could get over the top by just winning Florida or by winning Ohio or Virginia and a couple of the smaller swing states.  Republican have to win at least two of the big swing states or they are out of luck. 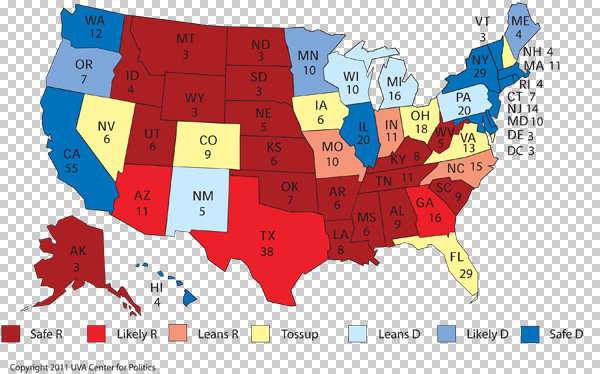 Posted by The Attack Democrat at 5:48 PM