Obama’s job plan—Is it too little, too late and too politically infeasible or just about right for the times?  Well below is a great graph from the Washington Post laying out the specifics of what Obama is proposing followed by some charts from FiveThirtyEight showing the level of support in various recent polls for different elements of the plan.  These proposals generally have majority public support which is probably why they were selected for Obama's "jobs" plan (The White House is avoiding using the "S" words as in Spending or Stimulus.)  The problem is the original stimulus was nearly twice as large and, while it stopped the hemorrhaging of jobs it wasn't enough to get unemployment under control.  A number of economists are saying Obama's new plan could create 1 million jobs. (See: http://money.cnn.com/2011/09/09/news/economy/obama_jobs_plan_impact/  )  That's not going to be enough to make a real dent in unemployment given that we have 14 million unemployed and many more underemployed.

So what Obama is proposing may have popular support but is likely too little, too late.  Additionally, while Treasury Secretary Timothy Geithner has called the initial Republican response to President Obama's jobs proposal "encouraging" there is no guarantee they will give Obama anything close to what he has proposed.  My bet is that they agree to a few items just to show "good faith" but make sure whatever is passed doesn't have a chance of doing any good.

I keep saying this:  The Republicans are basing their entire 2012 campaign strategy on blaming Obama for high unemployment and a bad economy.  They see no benefit and considerable loss from any improvement in jobs.  Indeed, they would like to see a double-dip recession.  Politically, that is where we are.   Obama's speech did have a little fire in it but that's not going to get him very far.  He would have been better off proposing something truly dramatic like a trillion dollars of spending and the creation of a job corps to put the unemployed to work right away.  Republicans wouldn't agree to anything that big but, at least, it would excite Obama's progressive base.  Right now many of us are pretty disappointed with Obama.  We'll vote for him but only because the alternative is so much worse.  Obama may not be great but Romney or Perry or Palin or Bachmann and all the rest of the Republican want-a-bees would be a disaster for the country.

I hate to say that I would ever agree with Dick Cheney about anything but maybe we would be better off if Obama went back to Chicago and Hilary ran in his place.  Of course, it won't happen but it would be fun to see.

Check out the charts: 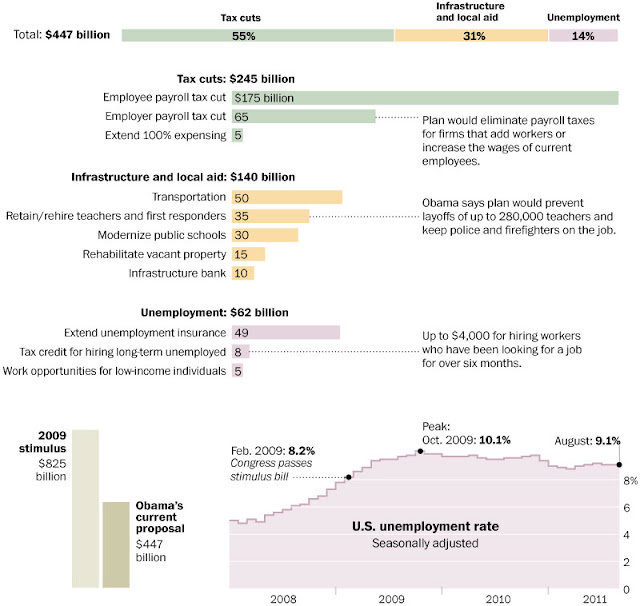 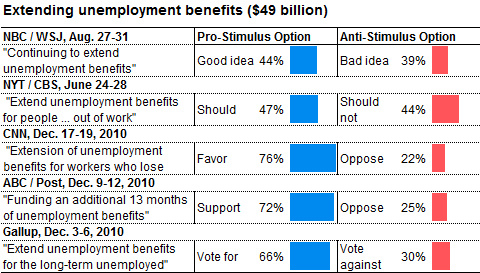 Posted by The Attack Democrat at 3:00 PM