Rand Paul (R, KY) doesn’t think we should worry very much about poverty in America.  He had this to say in a recent hearing.

PAUL: We also need to understand that poverty is not a state of permanence. When you look at people in the bottom 5th of the economic ladder — those at the bottom — only 5 percent are there after 16 years. People move up, the American dream does exist…The rich are getting richer, but the poor are getting richer even faster.

See him spout this nonsense in the following video:

Rand Paul gives the impression that research on poverty confirms the widespread belief among conservatives that the U.S. is the land of unlimited opportunity for everyone and that in this great land those who live in poverty do so for only a short time and that most of the poor go on to enjoy at least a middle or upper-middle income level later in life.  It sounds so good.  It sounds as if we don’t have to be that concerned.  And, it seemingly justifies the widespread belief among conservatives that people who are poor in this great country are poor solely because of their own life choices.  All they had to do is work hard and all would be well.  Thus, according to Paul, there is no need for government or the rest of us to concern ourselves with poverty in our country.  We can focus on more important things like providing tax breaks so the rich can get richer.

The problem with Paul’s argument is that it isn’t true.  This is from a study entitle Childhood and Intergenerational Poverty : The Long-Term Consequences of Growing Up Poor by Robert Lee Wagmiller and Robert M. Adelman at the National Center for Children in Poverty.  The researchers write:

“The American Dream” is rooted in the idea of upward mobility, the idea that individuals and families can escape the confines of poverty and disadvantage through hard work and perseverance.

Social and economic deprivation during childhood and adolescence can have a lasting effect on individuals, making it difficult for children who grow up in low-income families to escape poverty when they become adults. 6 Because the negative effects of deprivation on human development tend to cumulate, individuals with greater exposure to poverty during childhood are likely to have more difficulty escaping poverty as adults.

Studies focusing on the intergenerational transmission of poverty find that while individuals can break out of intergenerational cycles of poverty, they are less likely to do so than is commonly thought. 17Moreover, when subsequent generations do escape poverty they are likely to move into the ranks of the slightly less poor. 18 Poverty exits depend on numerous factors such as educational and employment opportunities, the availability of role models, and child and parent aspirations, 19 as well as a child’s birth order and when in the child’s life poverty occurs. 20

Researchers also find that the intergenerational correlation between incomes and earnings vary widely by race. For example, according to Hertz, 17 percent of whites who were born in the lowest income category between 1942 and 1972 remained there as adults while 42 percent of African-Americans did so.21 Similarly, in a separate study, Isaacs finds that not only do African-American children live in families with lower average incomes than whites, but “African-Americans experience less upward mobility and more downward mobility than whites.” 22 In general, scholars have found that race matters a great deal in intergenerational economic mobility.

Here is the truth, Paul although it doesn’t fit your ideology.  An American who is born in poverty today and spends any significant time in poverty during their childhood will find it extremely difficult to realize that American dream of being better off than their parents.  That’s why poverty is a problem we need to address.  It has to do with equal opportunity.   Take a look at this table, it tells the whole story. 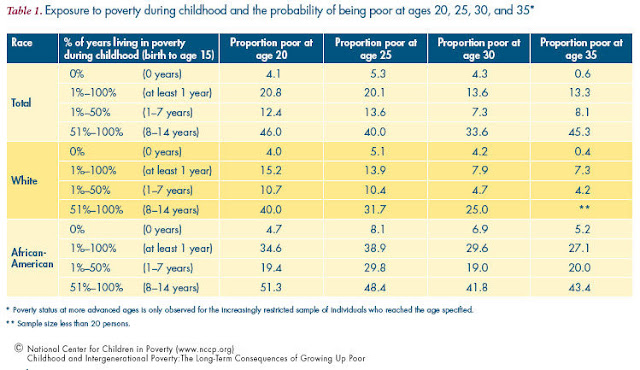 Source: http://www.nccp.org/publications/pub_909.html
Posted by The Attack Democrat at 5:05 PM