New analysis shows that Herman Cain’s 9-9-9 tax plan would result in a significant TAX INCREASE for most Americans and would shift the burden of taxation from the rich to the poor.

The non-partisan Tax Policy Center just released an analysis of Herman Cain’s 9-9-9 tax plan.  According to the Center, Cain’s plan would result in a TAX INCREASE FOR 77% OF AMERICANS.  Over 90% of the lowest quintile of wage earns would see their taxes increase by 17% on average.  In contrast, nearly 71% of the top quintile would see their taxes decline by an average of 8.6%.  The top 0.1% would do even better.  97.8% of the very rich would see their tax rate decline by more than 21% for an average tax SAVINGS of over $1,750,000 per year.  The super-rich would enjoy a 35.4% INCREASE in their after-tax income while the super-poor would see their after-tax income DECLINE by 17%.  See the table below or click on the link for more details. 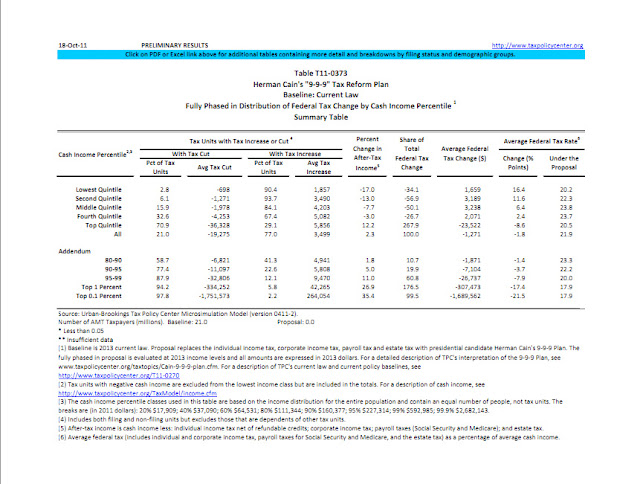 Cain’s plan is one of the most regressive tax proposals to be offered by any major party candidate in decades.  That’s not surprising.  Cain clearly blames the poor and unemployed for their condition.  Perhaps his tax plan is just his way of punishing them for not being rich.  This man doesn’t deserve to be president.  He doesn’t even deserve a cheap frozen pizza.
Posted by The Attack Democrat at 1:02 PM