Herman Cain has said that he didn’t know Sharon Bialek, the first accuser to come forward before the cameras to tell her story.  The day after Bialek’s press conference in which she accused him of sexual harassment, he said:

I saw Ms Allred and her client yesterday in that news conference for the very first time. As I sat in my hotel room with a couple of my staff members, as they got to the microphone, my first response in my mind and reaction was, I don't even know who this woman is.

Now, a reporter from Chicago has come forward to say that she saw Cain and Bialek together at a Tea Party convention just five weeks ago.  WIND radio co-host Amy Jacobson says the Cain/Bialek encounter occurred a month ago while backstage at the AM 560 WIND sponsored TeaCon meeting in Schaumburg Sept. 30-Oct. 1 at the Renaissance Hotel and Convention Center.  Jacobson says the Cain/Bialek encounter was “intense,” that you could “cut it with a knife,” and that she knew not to interrupt them. Jacobson had been trying to get a photo with Cain.  She said Bialek pushed past her, determined to talk to Cain, which she did for 2-3 minutes. Jacobson said it was clear Bialek had something she wanted to tell Cain and “by God she was going to tell him what she came there to tell him.”  Jacobson says she has no idea what they were actually talking about.

Bialek told the media on Monday about the encounter: “I went up to him and asked him if he remembered me. I wanted to see if he would be man enough to own up to what he had done 14 years ago.”

So, it appears Cain wasn’t exactly truthful when he said he didn’t know who Bialek was.

RightScoop provides this photo of Cain with Bialek supposedly taken at the event: 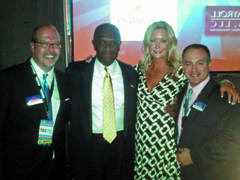 Read and hear more at these sites:

http://www.therightscoop.com/witness-cain-accuser-hugged-him-during-tea-party-meeting-a-month-ago/
Posted by The Attack Democrat at 3:15 PM