Does this chart explain the Republican race?

Joe Garofoli at the San Francisco Chronicle has produced an interesting chart that illustrates what has been going on in the Republican Party. Garofoli says the chart demonstrates that Republicans can’t reach agreement on a candidate because there is a definite split between Tea Party supporters in the party and non-Tea Party supporters.  Here is Garofoli’s chart and there is something MORE interesting about his chart than just the Tea Party/Non-Tea Party split.  See if you can detect what that is.  If you can't see the chart go here: http://blog.sfgate.com/nov05election/2011/11/16/tea-party-and-non-tea-partiers-split-over-gop-flavor-of-the-month-chart/ 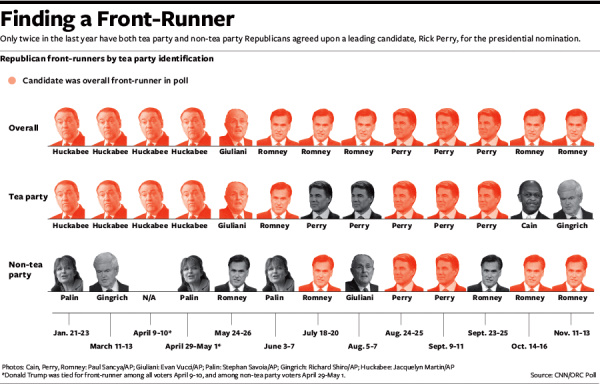 And, this.  A new McClatchy/Marist poll has Newt Gingrich as the strongest Republican candidate when matched head to head against Democratic President Barack Obama.  Gingrich is essentially tied with Obama in the poll (Obama 47%, Gingrich 45%).  Obama leads Romney by 4 points, Paul by 8 and all others by double digits.

So, Republicans might settle on Gingrich.  Gingrich might defeat Obama.  Then, we would have President Newt Gingrich for four long, long, long years.  No, no that’s just to horrible a thing to imagine.

Posted by The Attack Democrat at 5:29 PM