We must revoke the Republican licenses to kill

There is clear evidence that “Stand your ground” laws like the one in Florida that has been a topic of conversation since the killing of Tayvon Martin encourage violence.  They are nothing short of licenses to kill.

Mother Jones provides two chilling graphics concerning “Stand Your Ground” laws that all Americans should see.  Shortly before the Florida law passed, the Miami police chief warned:  “Whether it's trick-or-treaters or kids playing in the yard of someone who doesn't want them there or some drunk guy stumbling into the wrong house, you're encouraging people to possibly use deadly physical force where it shouldn't be used.''  Turns out he was right.  According to an investigation by the Tampa Bay Times in 2010, “justifiable homicides” skyrocketed in Florida after the passage of Florida’s “stand your ground” law.  See the first graph below: 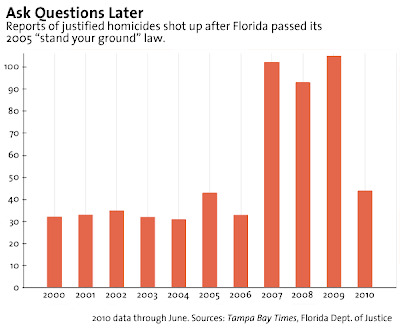 In spite of clear evidence that the Florida “stand your ground” law brought an increase in violence to the state’s citizens, making Floridians and vacationers alike LESS SAFE, the number of states enacting similar laws has continued to expand to nearly half of the states thanks to aggressive promotion of these laws by the NRA, Republicans and Conservative interest groups. 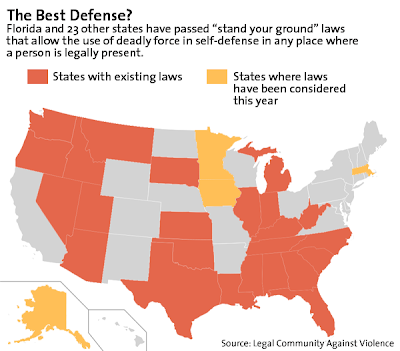 Our nation has long struggled with violence.  Thanks to these unnecessary and unwise laws, it is becoming even MORE violent.  We need to repeal these laws and revoke the Republican-issued licenses to kill.


Posted by The Attack Democrat at 3:46 PM