The Center for American Progress (CAP) has given us a chart that shows clearly what impact Obama’s stimulus package—The American Recovery and Reinvestment Act—had on job creation.  The Republicans will tell you that the stimulus DIDN’T WORK and that Obama has been a job killer.  Job killer?  CAP gives us the facts.  Two months after Obama and the Democrats got the Recovery Act passed over nearly universal Republican opposition, the country stopped hemorrhaging jobs.  Month after month job losses began to get smaller and smaller.  It took a year but by March 2010, the country stopped losing private sector jobs and started adding private sector jobs.  As of March 2012, we were into a 25-month streak of private sector job creation and most analysts expect job creation to continue and unemployment to continue to fall on a slow but steady basis.  Those are the FACTS.  Obama and the Democrats were RIGHT and the Republicans were WRONG.  In 2009, our economy needed a federal stimulus package to the get the private sector hiring again.  Everything that happened to the right of that red line on the chart would NOT have happened if the Republicans had gotten their way the federal government would have done nothing to get America back to work.  Job losses would have continued and might still be continuing.  Unemployment would not have peaked at 10%, it might have reached 12% or 15% or 20%--no one can be sure.  What we can be sure of is that stimulating the economy was the right thing to do in 2009 just as almost every economist said.  It just made sense to everyone—but Republicans.  Show your Republican friends the CAP chart below or here: http://www.americanprogress.org/issues/2012/04/jobs_gain.html 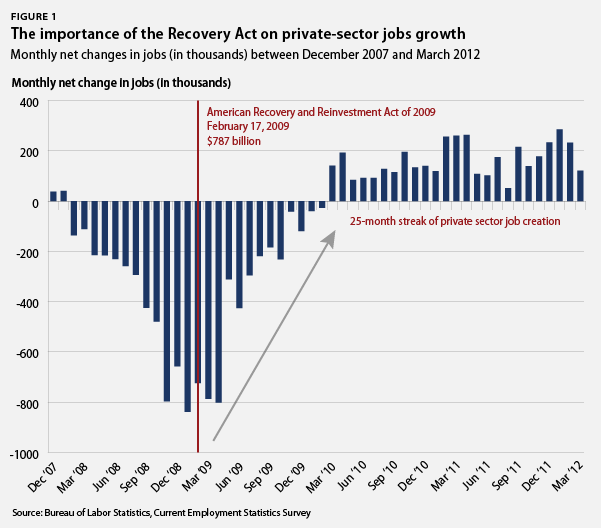 Posted by The Attack Democrat at 2:58 PM