Birthers have repeatedly questioned Obama’s citizenship.  One line of argument is Obama produced a “Certificate of Live Birth” as proof that he was a natural born citizen, not a “birth certificate.”  See the following typical birther rant:

Personal message from a reader dated Oct. 28, 2008:
[T]he Obama campaign did finally present a document which they claimed validated his eligibility (per the Constitution of the United States, Article II, Section I) as a "Natural born citizen" to have his name on the ballot in contention for the office of the President of the United States of America. However, contrary to what the few media outlets who are giving this outrageous claim any attention at all have concurred, what the Obama campaign supplied was not, in fact, a "birth certificate". What they supplied was actually a "Certificate of Live Birth." There is a major difference between a "birth certificate" and a "Certificate of Live Birth." Aside from the level of detail differentiating the documents (hospital of record, doctor, height, weight, etc) - in the state of Hawaii, one authenticates natural born citizenship, and the other doesn't.

Now Romney has come forward with his own proof of citizenship.  So, let’s compare the two.

Oh, my.  Has Romney produced a "Certificate of Live Birth" rather than a "birth certificate?"  Looks like it.  Hey, birthers.  You got another problem here. 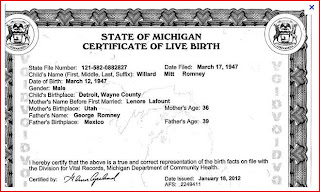 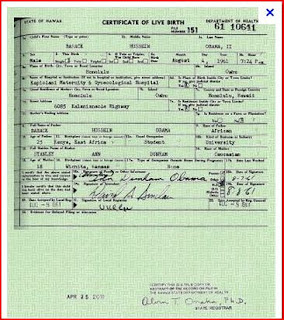 Posted by The Attack Democrat at 5:19 PM