Obama is the most moderate president

Republicans portray Obama as being a radical liberal, if not outright socialist.  So, how liberal is Obama compared to other U.S. presidents?  As it turns out, Obama is pretty much a moderate.

In a recent study, political scientists Keith Poole and Christopher Hare at the University of Georgia examined roll call votes in Congress in which the sitting president expressed clear support or opposition for a specific bill to determine how liberal/conservative presidents were in their policy positions going back to Truman.  See here for an explanation of the methodology: http://www.voteview.com/dwnomjoint.asp

Poole and Hare determined that “President Obama is the most moderate Democratic president since the end of World War II, while President George W. Bush was the most conservative president in the post-war era.”

The chart below and here http://voteview.com/blog/?p=317 shows the ranking of ranking of all presidents since Truman.

Check it out.  Obama is just about as much a liberal as Ike was a conservative. 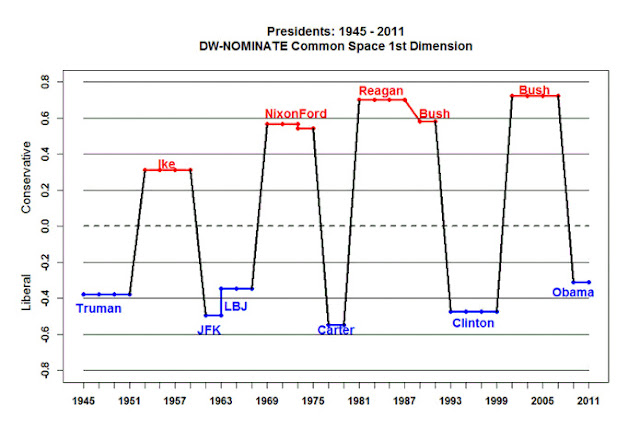 Posted by The Attack Democrat at 3:44 PM