Evidence: Republicans largely to blame for the dysfunctional Congress

Accept in rare cases, it no longer seems possible for members of Congress to reach bi-partisan agreements on how to solve major policy issues.  Most of us assume that bi-partisanship has become nearly impossible due to the ideological (conservative/liberal) polarization of the parties and the sharp decline in the number of moderate Congressmen and Senators.  Now we have empirical evidence not only that the parties have become more polarized but that most of the movement toward ideological purity that has made Congress largely dysfunctional has occurred in the Republican Party, particularly in the House and largely since the Reagan Revolution of the 1980s.

A group of political scientists from Princeton and the University of Georgia have published an analysis of party polarization.  They find it is real and asymmetrical as the charts at the end of this post show.

The researchers note that both parties have contributed to the polarization with Democrats becoming more liberal and Republicans more conservative.   However, most of the Democratic Party movement to the left “is a product of the disappearance of conservative Southern “Blue Dog” Democrats… [while] the northern Democrats of the 1970s are ideologically indistinguishable from their present-day counterparts.”   They continue “we should be careful not to equate the two parties’ roles in contemporary political polarization: the data are clear that this is a Republican-led phenomenon where very conservative Republicans have replaced moderate Republicans and Southern Democrat…Moreover, the rise of the “Tea Party” will likely only move Congressional Republicans further away from the political center.”

Bottom line:  If you want to know why it has become increasingly difficult to get things done in Washington, look to the Republican Party.  Republicans carry most of the blame for making the U.S. Congress, and American government in general, increasingly dysfunctional.  The solution is simple—Vote Democratic.  Turn the Republican extremists out.  Send a message to the GOP that it must return to the mainstream of American politics if it wishes to win elections.

The charts providing graphic evidence of the Republican Party movement to the extreme Right follow or you can view them at this link as well as read the complete analysis by the political scientists: http://voteview.com/blog/?p=494 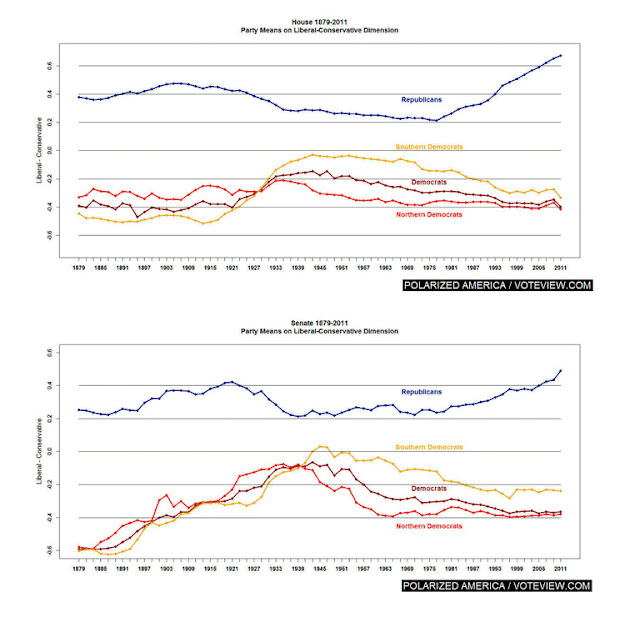 Posted by The Attack Democrat at 2:33 PM