Which president increased spending the most?

You’ve probably heard the Republican rant about Obama’s runaway spending.  So, what’s the truth?  Which president increased federal spending the most?  Was it Obama, Clinton, Bush I, Bush II or Reagan?  You may be surprised to learn that rather than being a spendthrift, actually Obama has done a much better job at slowing the growth of federal spending than any of his recent predecessors, even if you count the stimulus.  According to Rex Nutting at Market Watch, federal spending under Obama has increased at an annual rate of just 1.4% and, adjusted from inflation has actually declined.  That’s a better track record on spending than Reagan, Bush I, GW, or Clinton.  Check out the facts here:
http://www.marketwatch.com/story/obama-spending-binge-never-happened-2012-05-22?pagenumber=1

And in the Nutting’s chart below: 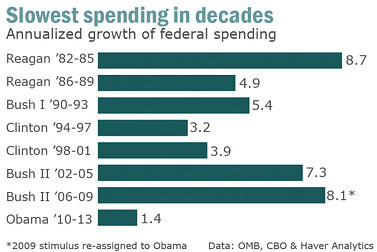 Posted by The Attack Democrat at 2:39 PM