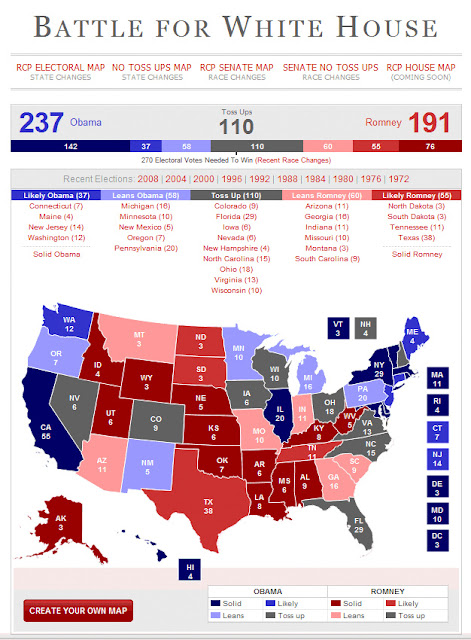 According to Real Clear Politics, Obama has a lock on 142 Electoral Votes largely from big states like California and New York that are not likely to go Republican.  He has 37 Electoral votes from states he is likely to win and 58 from states that are leaning in his direction.  Romney starts off with 191 sure Electoral votes with 55 likely to go for him and 60 leaning in his direction.  So, Obama has 237 Electoral votes BEFORE we take the true battle ground states into consideration.   Romney has just 191 Electoral votes WITHOUT the battleground states.
Now it gets to be fun.  There are nine (9) battle ground states according to Real Clear Politics.  Four of these are states with less than 10 electoral votes—Colorado, Iowa, Nevada, and New Hampshire.  Five of these battleground states have more than 10 electoral votes: FL with 29, OH with 18, NC with 15, VA with 13 and WI with 10.
Assume either Obama or Romney takes all of the battleground states with LESS Than 10 electoral votes each.  That’s 25 votes total.  That would give Obama 262 Electoral Votes which would be just 8 votes short of the 270 he needs to win.  If Romney wins ALL of the less-than-10 Electoral Vote Battleground states, the he has 216 votes.  He is still 54 votes short.
Obama can get the 270 votes he needs at this point by picking up just one of the five remaining states.  On the other hand, Romney needs to pick up three of the five states, even if he wins the biggest prize—Florida.  If Romney doesn’t win Florida, he has to pick up ALL of the remaining states other than Florida to win.
That’s Romney’s problem and it is a BIG one.  Run the number yourself.

Posted by The Attack Democrat at 5:59 PM