It is June once more

Nate Silver at Five Thirty Eight says the election has come full circle.  After the conventions and debates and gaffs and endorsements and job numbers and over a billion dollars in ads, we are right back where we were last June.  The race is close with Obama having a slight lead in the swing states and Electoral College.  The Electoral College map looks almost exactly as it looked last June.  Take a look at Silver’s forecast on June 7 vs. now.  See the chart below and here http://fivethirtyeight.blogs.nytimes.com/2012/10/29/oct-28-in-swing-states-a-predictable-election/#more-36832
While Romney has improved in some of the June swing states and Obama in others, none of the swing states that Silver had in Obama’s column in June switched to Romney and none of the Romney states switched to Obama.  In fact, Silver says the projected leader his model had in every one of the fifty states is exactly the same as it was back in June. 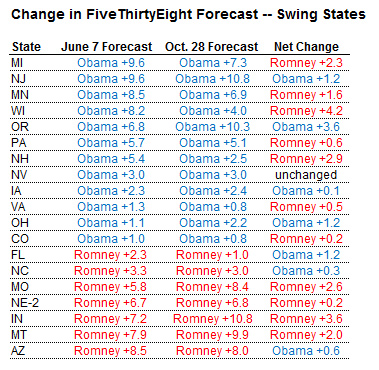 Posted by The Attack Democrat at 3:08 PM