Princeton Professor Sam Wang has released the results of a sophisticated “meta-analysis” projecting the likely outcome of the Presidential election.  In 2008, Wang’s analysis predicted the outcome of the election within 1 electoral vote.  In 2010, Wang’s calculations missed the Senate outcome by 1 seat and the House outcome by 13.  That’s a very good record, up there with the best/most accurate forecasts.
So, what is Wang predicting this time?  As of today, Wang’s model predicts that Obama will get 299 electoral votes to 239 for Romney.

The charts below (or go here:  http://election.princeton.edu/history-of-electoral-votes-for-obama/
Show the likely outcome of the election at the 68% (RED) and 95% (YELLOW) confidence levels.  In short, Wang’s model says we can be 68% confident given current polls and trends that Obama will receive somewhere between 280 and 320 electoral votes and win the election.  We can be 95% confident—nearly certain--that Obama’s electoral vote count will be between about 260 to 330 electoral votes (See the blue bar chart below).

In short, Wang says there is a very high probability based upon current polls and trends that Obama will win re-election with a much smaller probability (but not impossibility) that Romney will win (See the portion in YELLOW below the RED line on the first chart below). 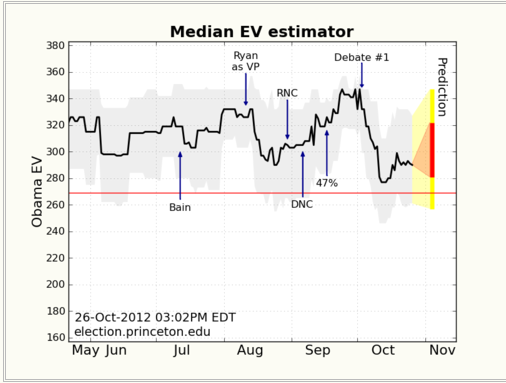 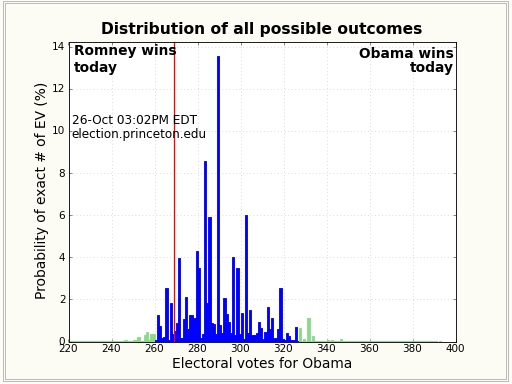 Posted by The Attack Democrat at 4:35 PM