A message to the NRA and other gun lovers—Enough already.

The Connecticut mass murderer who took the lives of 20 young children and 7 adults was able to kill so many because he used rapid-fire weapons.  Reportedly these consisted of two handguns, a Sig Sauer and a Glock.  These weapons are easy to carry and conceal and are capable of firing up to five bullets per second.  No one in this murderer’s field of view had a chance to run or find cover. 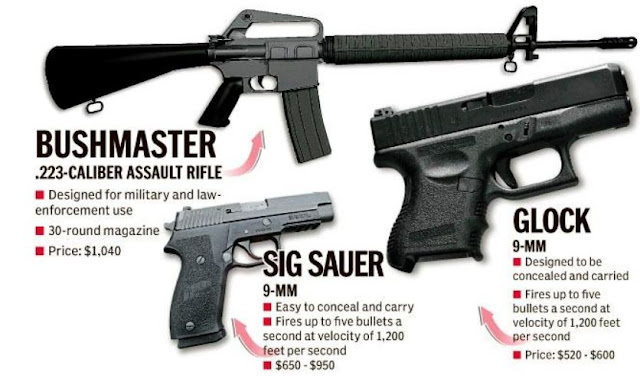 These weapons have been used before by deranged individuals to kill and injure innocent men, women and children.  And yet, members of the NRA and other so-called defenders of the 2nd Amendment argue that to ban such weapons would be a violation of their Constitutional rights.  That’s bullshit.

No one in this country needs to own a functioning, Glock, Sig Sauer and other such weapon.  You can’t hunt with them.  Shooting animals with such weapons wouldn’t be hunting, it would be just spraying bullets hoping something might hit passing game.  If you want to use them for target practice, there is no reason why you couldn’t rent them whenever you engage in the sport so that we could tightly control their use.  Think of it like renting bowling shoes or a bowling ball.  No one needs a weapon that fires five bullets a second for self-defense.  How many times to do you need to shoot a burglar or attacker to get him to stop?  And, all of you “Patriots” out there who are stocking these weapons so that someday soon you can rebel and overthrow the U.S. Government, I have news for you.  The feds have tanks and bigger guns.

Give me a break.  I don’t want to take your precious guns away from you.  But, you are endangering my life and the lives of every American.  Of course, you maintain that you are a responsible individual.  You would never use your Glock to harm anyone that wasn’t trying to harm you.  Maybe so.  But, there is a good chance you may lose control of that weapon at some point.  It could end up in the hands of some deranged person who will use it to kill children.   Are you willing to take that risk?

Look, all the rest of us want is a chance.  Own as many guns as you want but you don’t need to own guns that fire five bullets or more per second.  Wouldn’t ONE bullet a second be enough?  Why not make it sporting?  Would it be so bad if you had to cock the damn thing each time before you fired off a round?  Maybe then, the next time your fellow Americans who have done you no harm who are shopping at a mall or going to school or attending a political rally or doing a hundred other day-to-day things would have a chance to run away, find a hiding place or disarm the murderer before he can do so much damage.

Keep your 2nd Amendment rights but can’t you at least give us a chance—a minute or two to get away?  Is that too much to ask?

Posted by The Attack Democrat at 5:12 PM