If you hate the deficit, you should LOVE the fiscal cliff

If you are really concerned about the deficit, you should NOT WANT Republicans and Democrats to reach an agreement to prevent the “fiscal cliff.”   In fact, you should be writing Congress demanding that your representatives DO NOTHING to prevent the country from going off the fiscal cliff.  Yes, NOTHING, INACTION, THE FAILURE TO REACH AGREEMENT, TOTALLY GRIDLOCK is just what is needed to solve the deficit problem.
Look at this chart prepared by the Congressional Budget Office.  The dotted line shows what will happen if the Bush tax cuts are extended for everyone and the scheduled cuts in domestic and defense spending aren’t allowed to happen.  The solid like shows what will happen if we plunge over the fiscal cliff big time—the Bush tax cuts expire for everyone and all of the automatic cuts in defense and non-defense spending kick in as scheduled.  The debit to GDP ratio goes from 73% this year to a very sustainable 61% in 2022 to an exceedingly healthy 53% in 2037.  The debit problem is TOTALLY SOLVED. 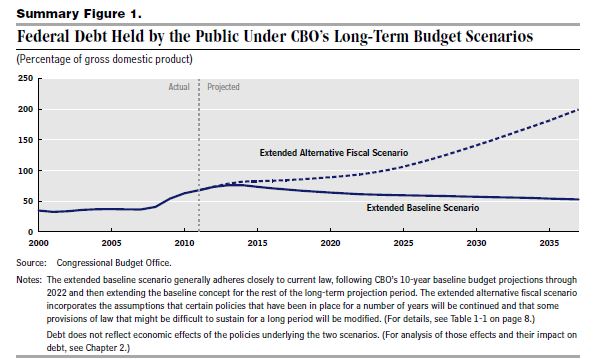 Posted by The Attack Democrat at 3:46 PM