Obama's Syria problem in one graph

Pew Research has released the results of a new poll on what Americans think about Syrian airstrikes.  The results are bad news for the Obama administration.  63% of Americans now say they OPPOSE the airstrikes.  That's up from 48% opposed just a little over a week ago.  Undecided has gone from 23% to just 9%.  All of the undecided who have made up their minds are now OPPOSED.  It looks like momentum is AGAINST Obama on this one.  Chances are not good that he can now turn things around with regard to public opinion on Syria and without a dramatic switch in public opinion, he probably will not be able to get the votes he needs in the House and maybe not even in the Senate.  Read the poll and see the graph here: http://www.pewresearch.org/  or below. 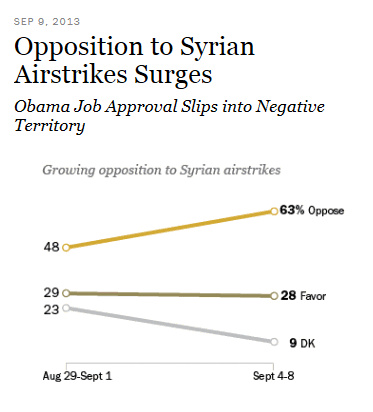 Posted by The Attack Democrat at 3:49 PM