Take a look at these to maps.  The first is Nate Silver's Polls-Only Forecast of the probable outcome of the election as of today.  The second is the New York Times map of the final results of the 2012 election.  What has changed? 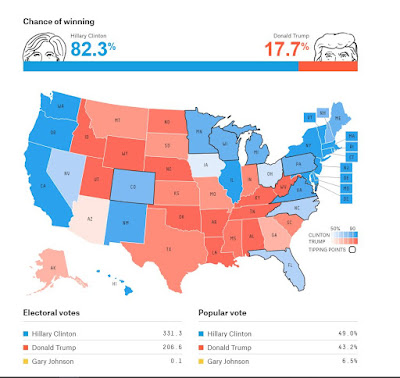 So, what has changed?  Not much.  How could that be?

Jon Wiener has written a great article in The Nation.  Read it here:

Wiener points out something political scientists have been saying for a long time.  When it comes to national elections, voting patterns don't change that much from election to election.

Most people who were eligible to vote in 2012 and didn’t vote, will not vote this year.

Most people who claim to be Independents will vote for the same party they voted for in 2012 and 2008, usually either Democrat or Republican and not a third party.

Most people who say they are Undecided (How could anyone be undecided this year) will never be able to make up their mind and will just stay home and not vote.

It looks like this historical patten is going to continue, even this year, even with the Republican nominating the most unqualified candidate to ever seek the presidency.

Amazing.  Simply amazing.
Posted by The Attack Democrat at 10:43 AM