Donald Trump may be committing a felony by not reporting his wiretapping evidence.

Why?  Let’s start by looking carefully at what Trump said in his tweets.

What did Trump actually say in his tweets about wire tapping?

Trump and his underlings are spinning like a top on what he really said about Obama and wire tapping.  Let’s not forget Trump’s exact words.  Here they are: 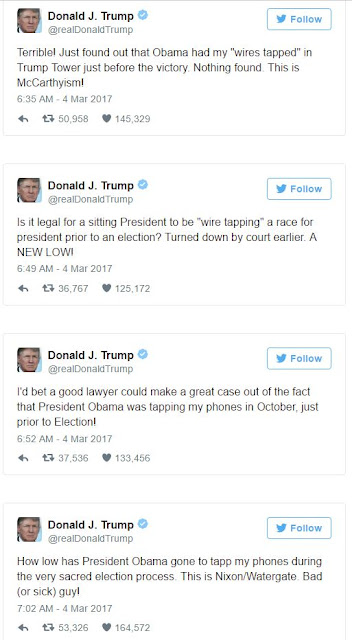 Notice, Trump says “Obama had my ‘wires tapped.”  He says, “Is it legal for a sitting President to be ‘wire tapping’…”  He says “President Obama was taping my phones…”He says “How low has President Obama gone to tapp my phone…”  There is only one way to read these tweets regardless of what kind of spin Trump and his underlings put on it.

Trump is clearly saying: “President Barack Obama ordered agents of the Federal Government or someone to tapp my phones.”  That’s the only possible interpretation of what Trump was saying.

Let’s assume for a moment that when he used the words “wires tapped”, “wire tapping”, “tapping my phones,” and “tapp my phones,” Trump was referring to something broader than wire tapping such as “spying,” “surveillance,” “monitoring, electronic or otherwise,” “shadowing,” “watching,” or any other similar term.  It doesn’t’ matter.

Trump was clearly saying that Obama gave an illegal order for someone or some agency to engage in an invasion of Donald Trump’s privacy and thereby committed a felony.  It does not matter whether the alleged act was one of “tapping phones.”  This is clearly one President is accusing a former President of committing a criminal act.

Trump may be committing a felony by not coming with what he knows about the wiretapping.

Specifically, Donald Trump was accusing Barack Obama of violating “18 U.S. Code § 2511 - Interception and disclosure of wire, oral, or electronic communications prohibited”  which says in part “any person who—(a) intentionally intercepts, endeavors to intercept, or procures any other person to intercept or endeavor to intercept, any wire, oral, or electronic communication;”…” shall be punished as provided in subsection (4) or shall be subject to suit as provided in subsection (5).”  Section 4 calls says anyone found guilty of the section shall be subject to a $500 fine and/or up to five years in federal prison.
See: https://www.law.cornell.edu/uscode/text/18/2511

Trump said in his tweets that he has knowledge that Obama committed at crime—violated 18 U.S. Code § 2511.  Under the U.S. Code, Trump has an obligation to formally report this crime to federal authorities along with whatever evidence leads his to suspect that Obama committed the crime . 18 U.S. Code § 2511 says “Whoever, having knowledge of the actual commission of a felony cognizable by a court of the United States, conceals and does not as soon as possible make known the same to some judge or other person in civil or military authority under the United States, shall be fined under this title or imprisoned not more than three years, or both.
(June 25, 1948, ch. 645, 62 Stat. 684; Pub. L. 103–322, title XXXIII, § 330016(1)(G), Sept. 13, 1994, 108 Stat. 2147.)”  Source: https://www.law.cornell.edu/uscode/text/18/4
misprision of felony.

Posted by The Attack Democrat at 5:15 PM