Donald Trump Jr. apparently thinks that attempted rape is funny or at most just innocent child’s play.  Check out his post.   https://www.huffingtonpost.com/entry/donald-trump-jr-posts-meme-mocking-woman-accusing-brett-kavanaugh-of-sexual-assault_us_5b9f996ee4b013b0977cc464 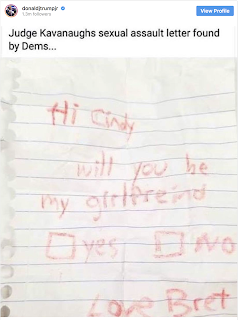 Ed Rollins, co-chairman of the pro-Trump Great America PAC thinks that if only men who have never tried to rape women are qualified then “no one will ever want or be able to serve in government or on the judiciary.”  https://www.thedailybeast.com/trump-believes-there-is-a-conspiracy-to-submarine-the-kavanaugh-nomination

A lawyer “close to the White House” agrees.  He apparently thinks just about every man has tried to rape a woman at some time and therefore that having an instance of attempted rape in one’s background  is pretty normal.  He said, “If somebody can be brought down by accusations like this, then you, me, every man certainly should be worried. We can all be accused of something.”  https://www.politico.com/story/2018/09/16/kavanaugh-allegation-anonymous-republicans-825855

Rep. Jack Kingston (R-GA) and a top Trump supporter thinks that a nominee’s “less than perfect behavior in high school” shouldn’t be held against them.  He says ““Let’s all step back and think about our own perfect behavior when we were in high school….I think there have been enough people from both parties, although far more liberals than conservatives, who have received such allegations… Not many, however, have been accused of things that they may have done in high school—but something that was bottled up until now.” https://www.thedailybeast.com/trump-believes-there-is-a-conspiracy-to-submarine-the-kavanaugh-nomination

Posted by The Attack Democrat at 2:26 PM